A Restful Week in Anchorage, AK

After a couple of rainy days in Sitka, a short flight brought us to Anchorage, where we hoped to see the surrounding area at a relaxed pace and just soak up whatever Anchorage had to offer. 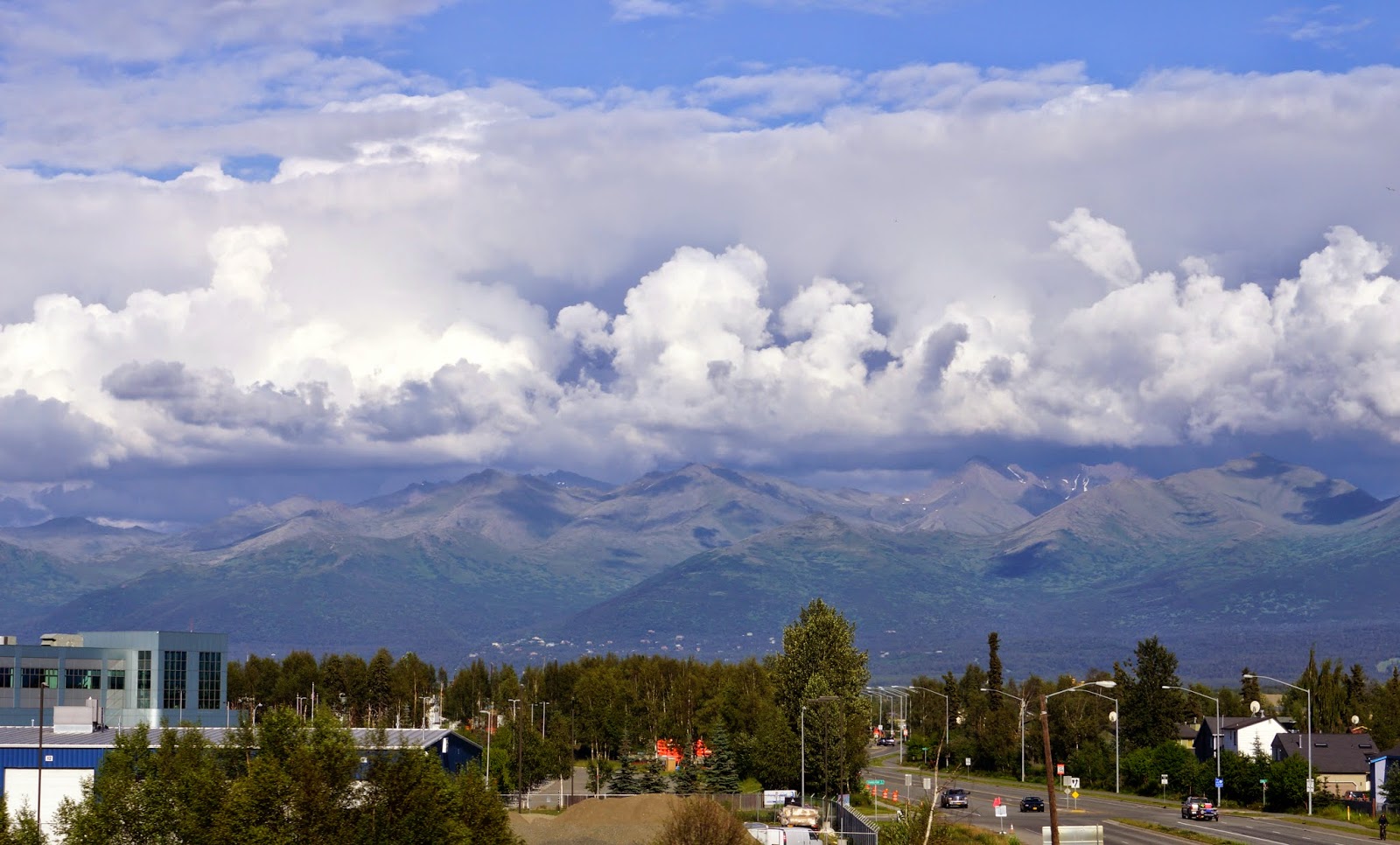 Anchorage is bounded by the Chugach Mountains (above) on one side and water on the other three. To the south is Turnagain Arm, to the west is Cook Inlet and to the north is Knick Inlet.  All three bodies of water are pretty wide, shallow and grey with glacial silt - not at all like the water we were used to seeing in southeast Alaska.

Anchorage is a medium sized city, with typical US retail, an international airport, a large university, industry and tourists regularly pouring off cruise ships and trains.  We found a great B&B online on Sand Lake, just south of the airport. It's a very green area of the city, very close to Kincaid Park, prime moose territory.

(BTW, if you want to see moose, hang out in Anchorage for a week. In fact, in our first few minutes in Anchorage, while picking up our rental car a moose went trotting down the street, right behind our car.)

So, Lakeside B&B run by Ann and Tim Rittal, is basically the whole bottom floor of their home, with a great view of the lake, a deck and a lovely backyard. 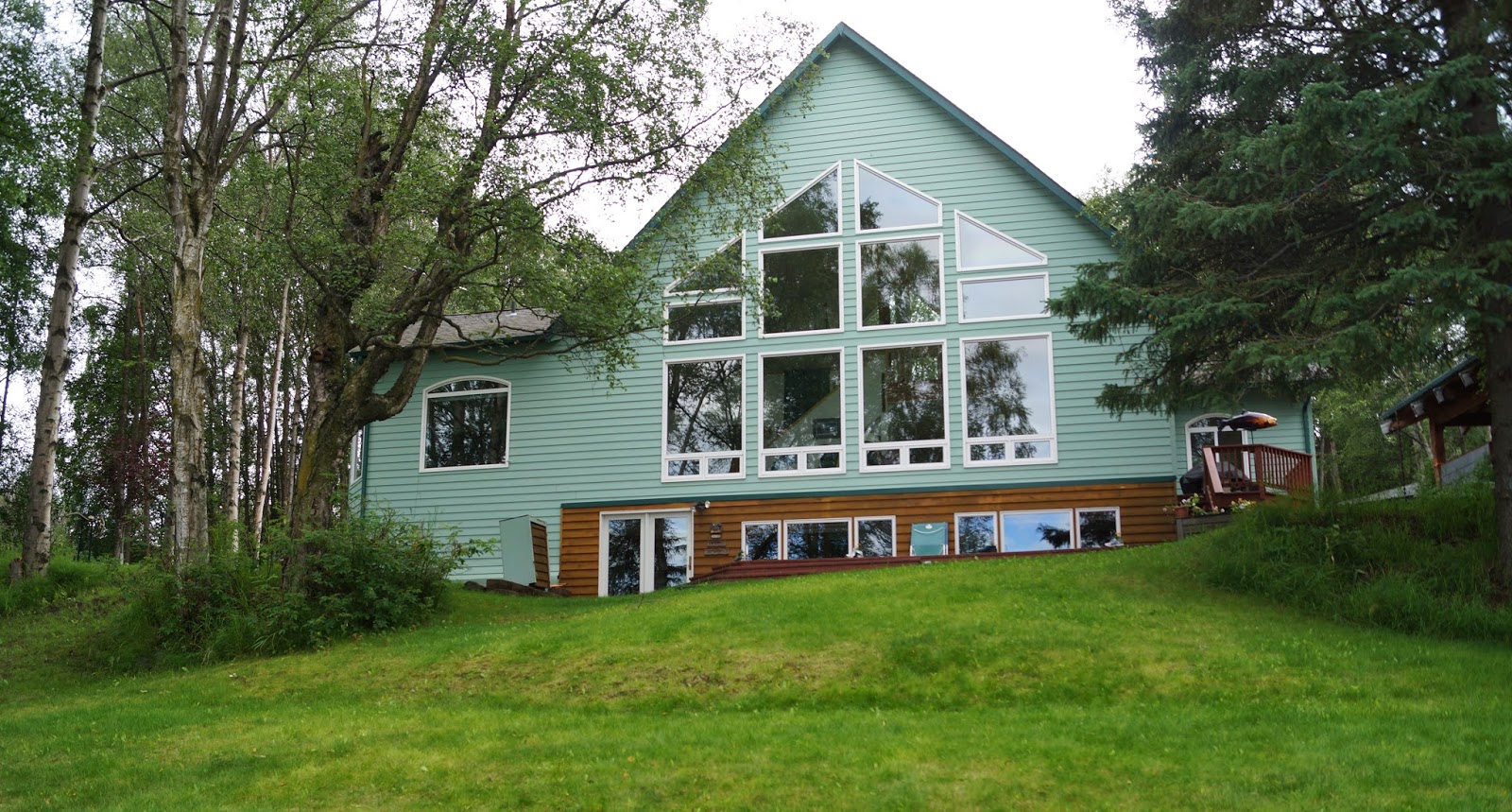 Inside there is a large living room, dining table and kitchen... 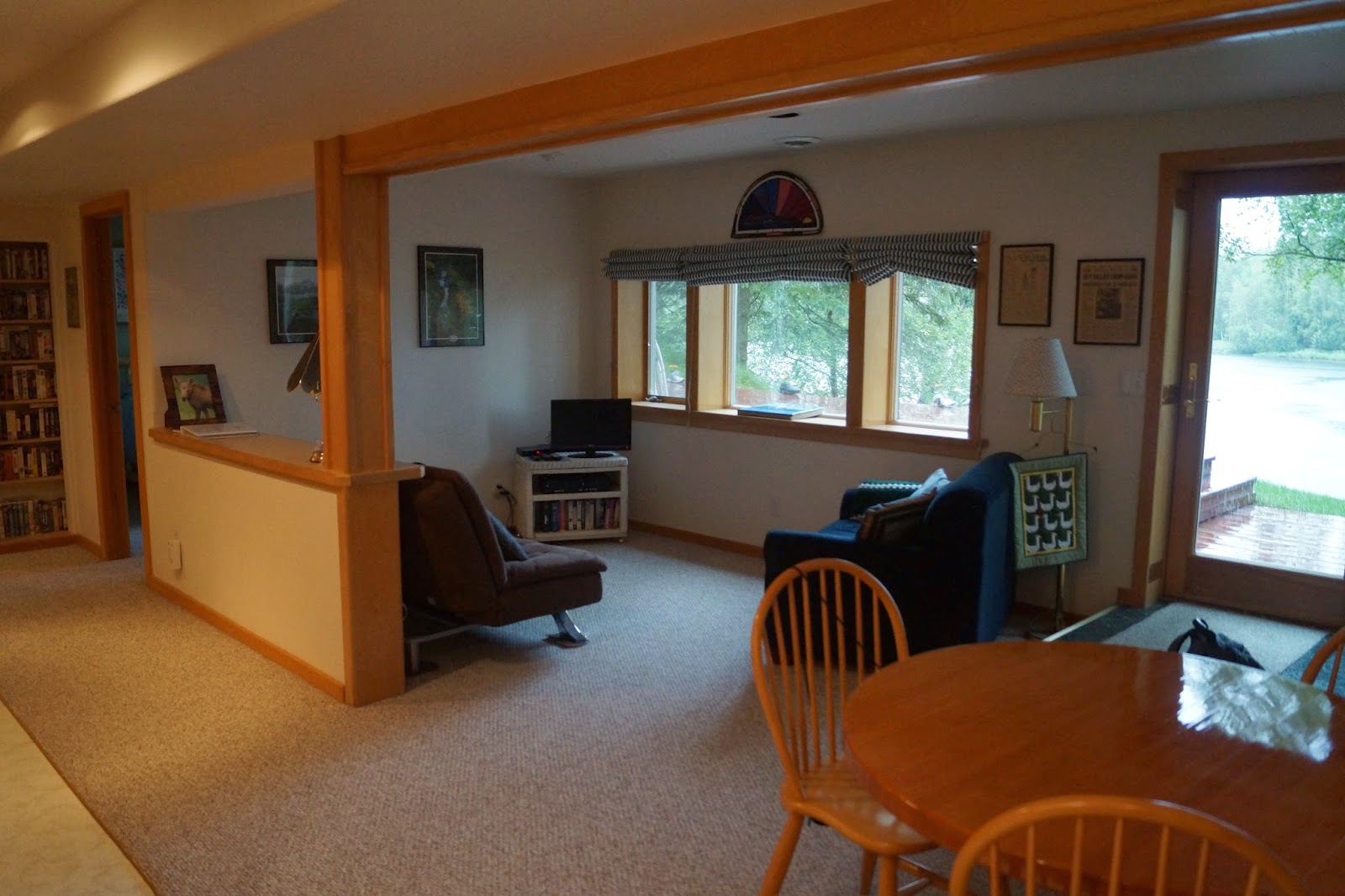 ...bedroom, and private bath. The apartment is completely private and well stocked with books, videos and information about the local area. Ann provided us with plenty of breakfast supplies that we were free to fix for ourselves. It was like having our own cozy apartment for the week, and was a lot more space than we're used to in the RV. 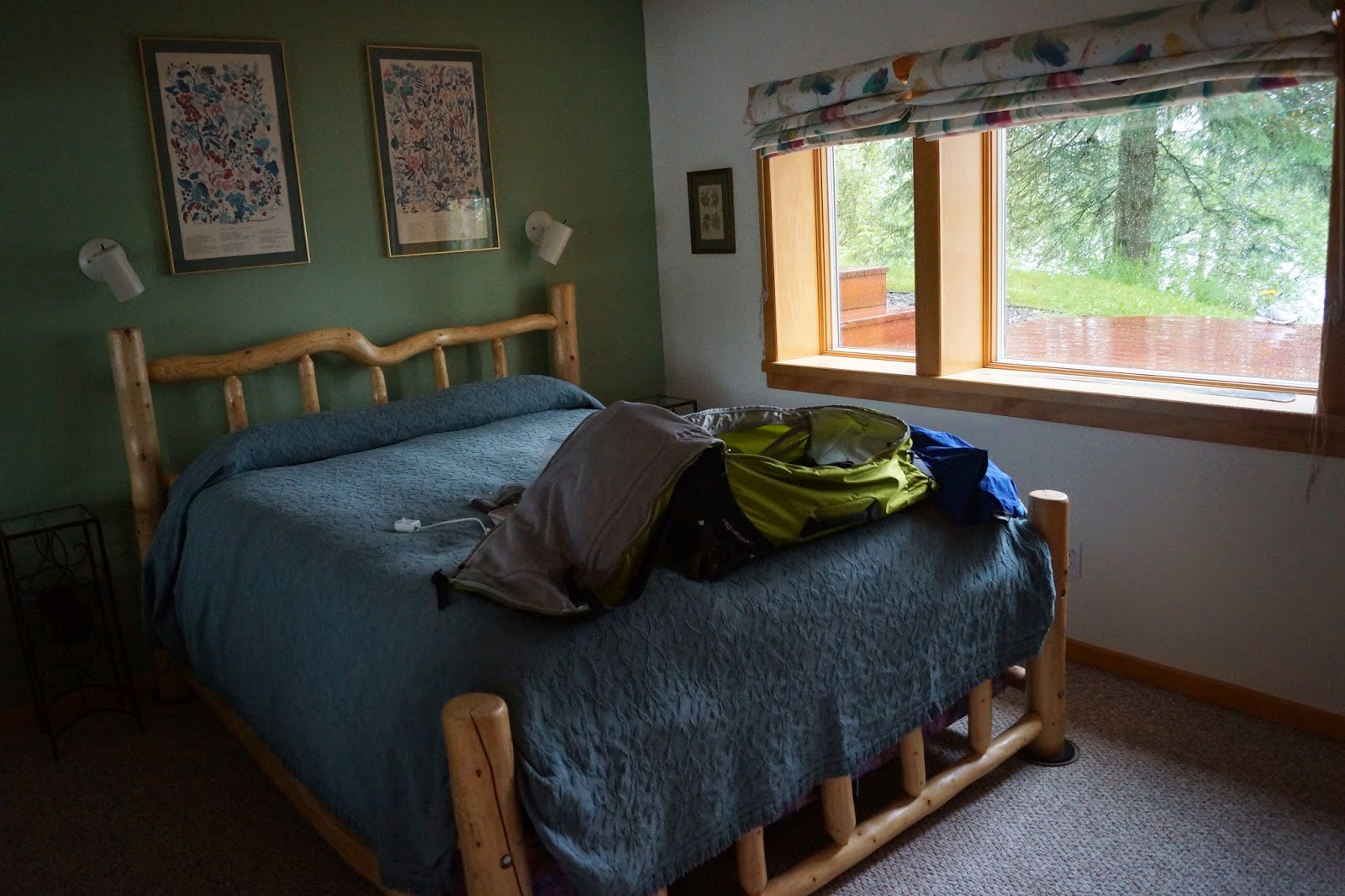 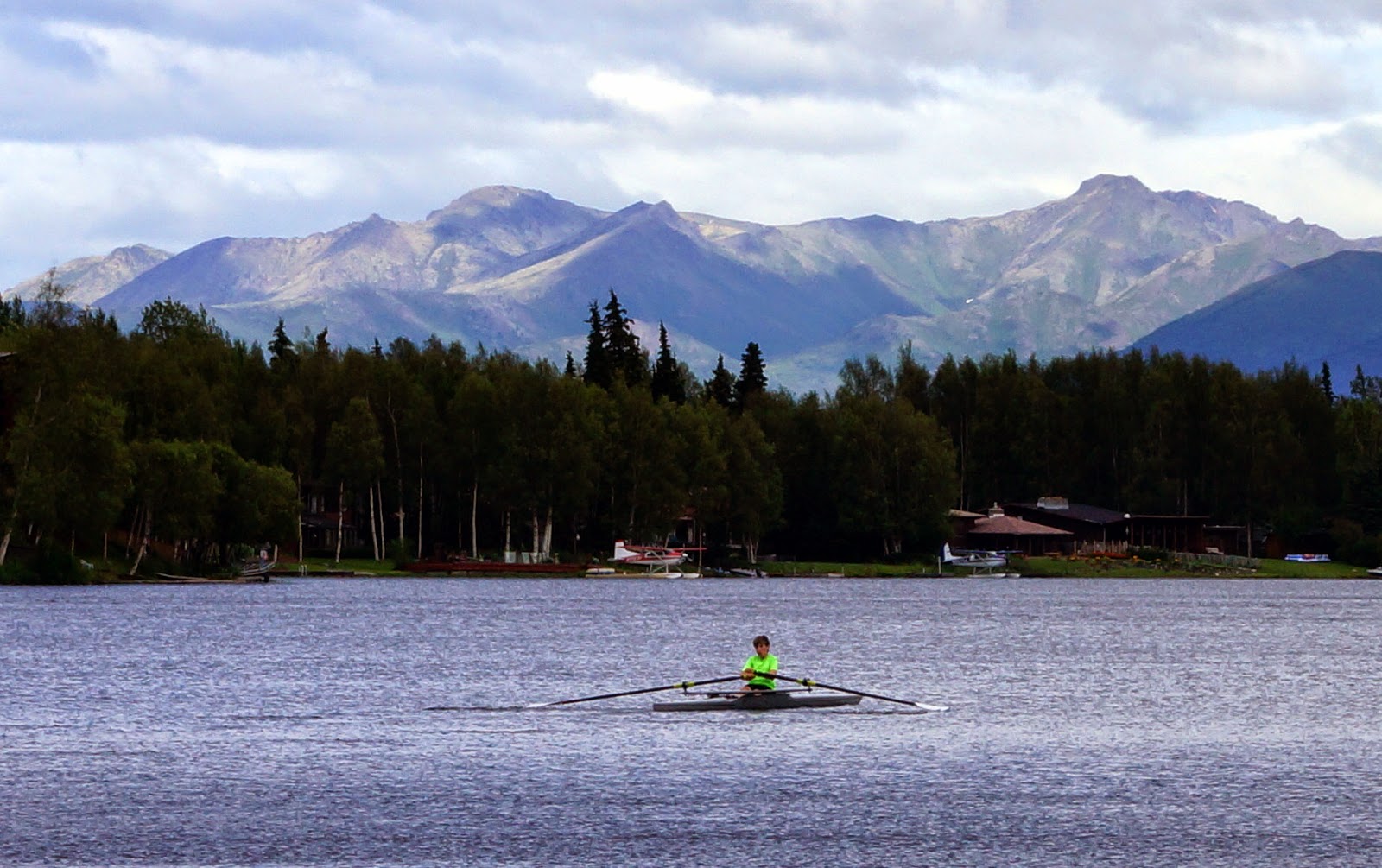 A couple of nice mallard families lived in the yard and visited us now and then.

Our first day in Anchorage we visited the Alaskan Native Heritage Center. Upon entering we listened to a pretty remarkable highschool student who was talking about Alaskan Native history and culture to a group of visitors in the theatre area. She was speaking articulately and confidently without any notes, answering all kinds of questions with unusual expertise for a young person. 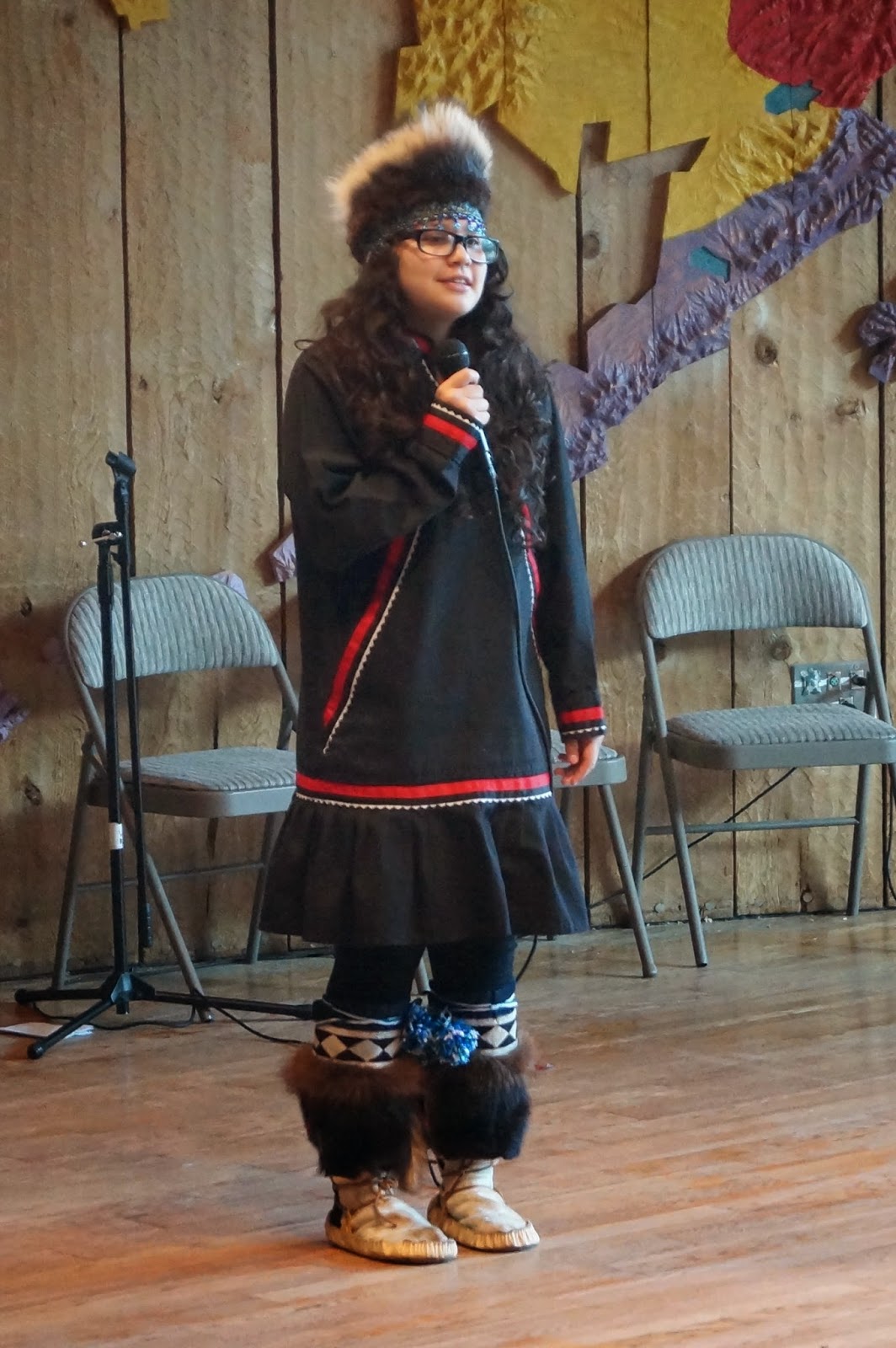 Later we saw her performing native song and dance with other students and one of their teachers. They were all talented high school students who are committed to learning the language, culture, song and dance of Alaskan native groups. In addition to their training and rehearsals, they volunteer their services and guides and performers at the museum. 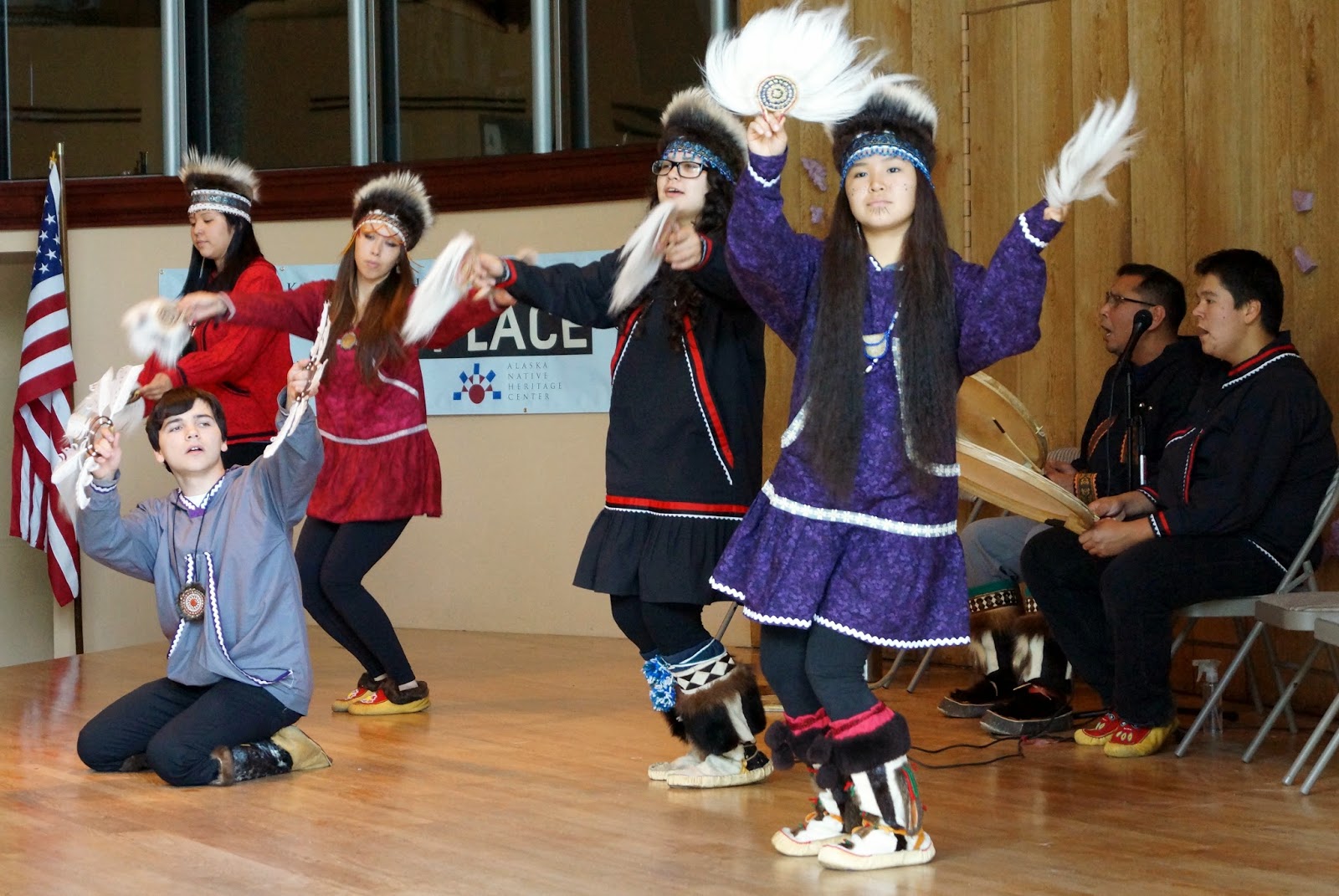 Inside the main building of the museum, in addition to the theater, there are exhibits of Native artifacts such as clothing, baskets, tools, kayaks, etc. But outside is the most unique part of this museum: examples of traditional buildings and homes of various Alaskan Native people.  The stereotype of Alaskan homes is the igloo. No igloos here. In fact, we learned that Eskimos are only one of the many Native groups in Alaska and are now referred to as Inuit. Represented here are Athabascan, Inupiaq/St. Lawrence Island Yupik, Yup’ik/Cup’ik, Aleut, Alutiiq, and the Eyak, Tlingit, Haida and Tsimshian peoples.

All the buildings are arranged around a lake.
Through this gate made of whale ribs you can just see the main Museum building. 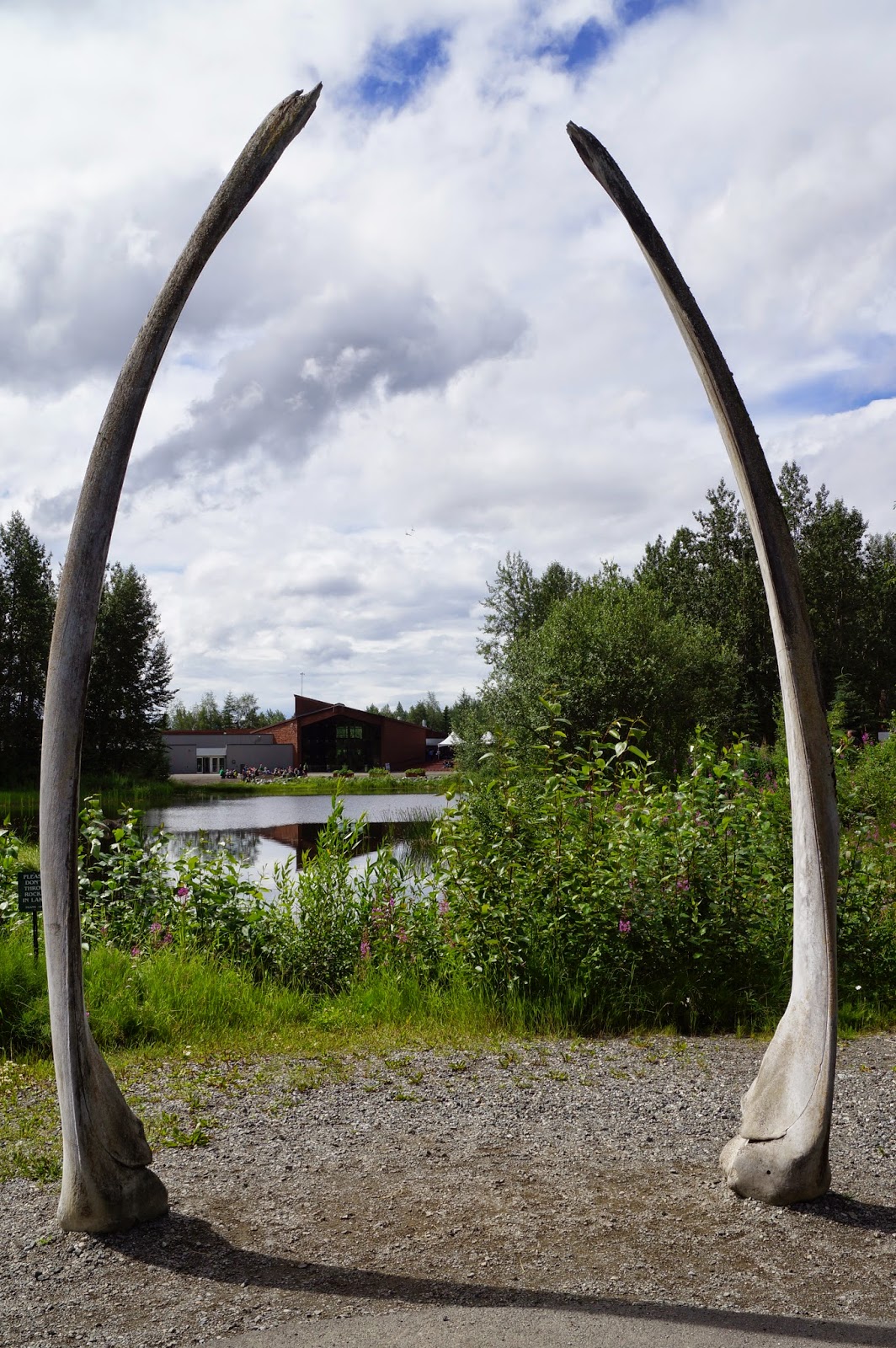 This is a Tlingit community house, where many families would live together. 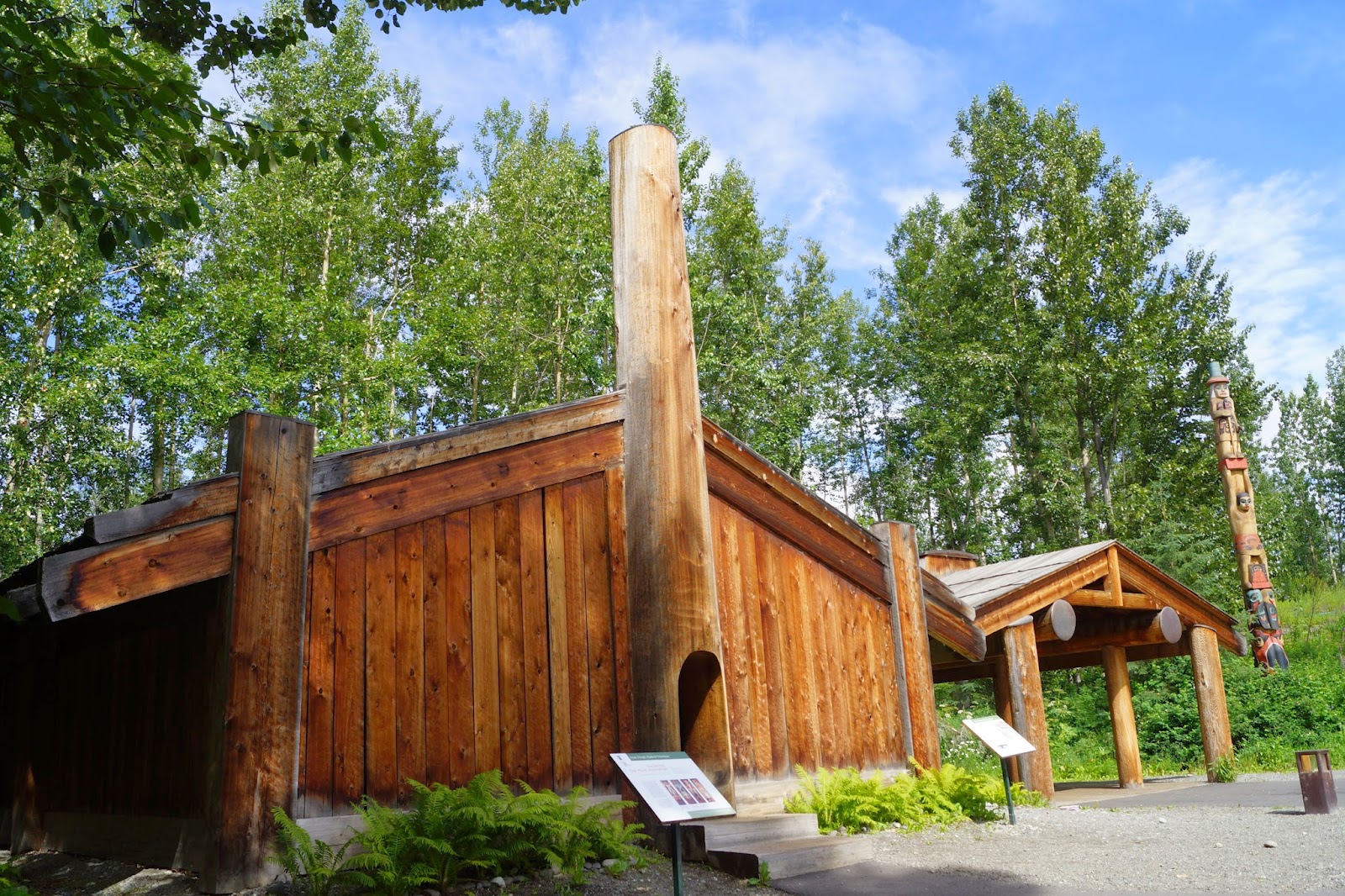 Inside were some beautiful carvings on house poles, which are like totem poles but are used inside. 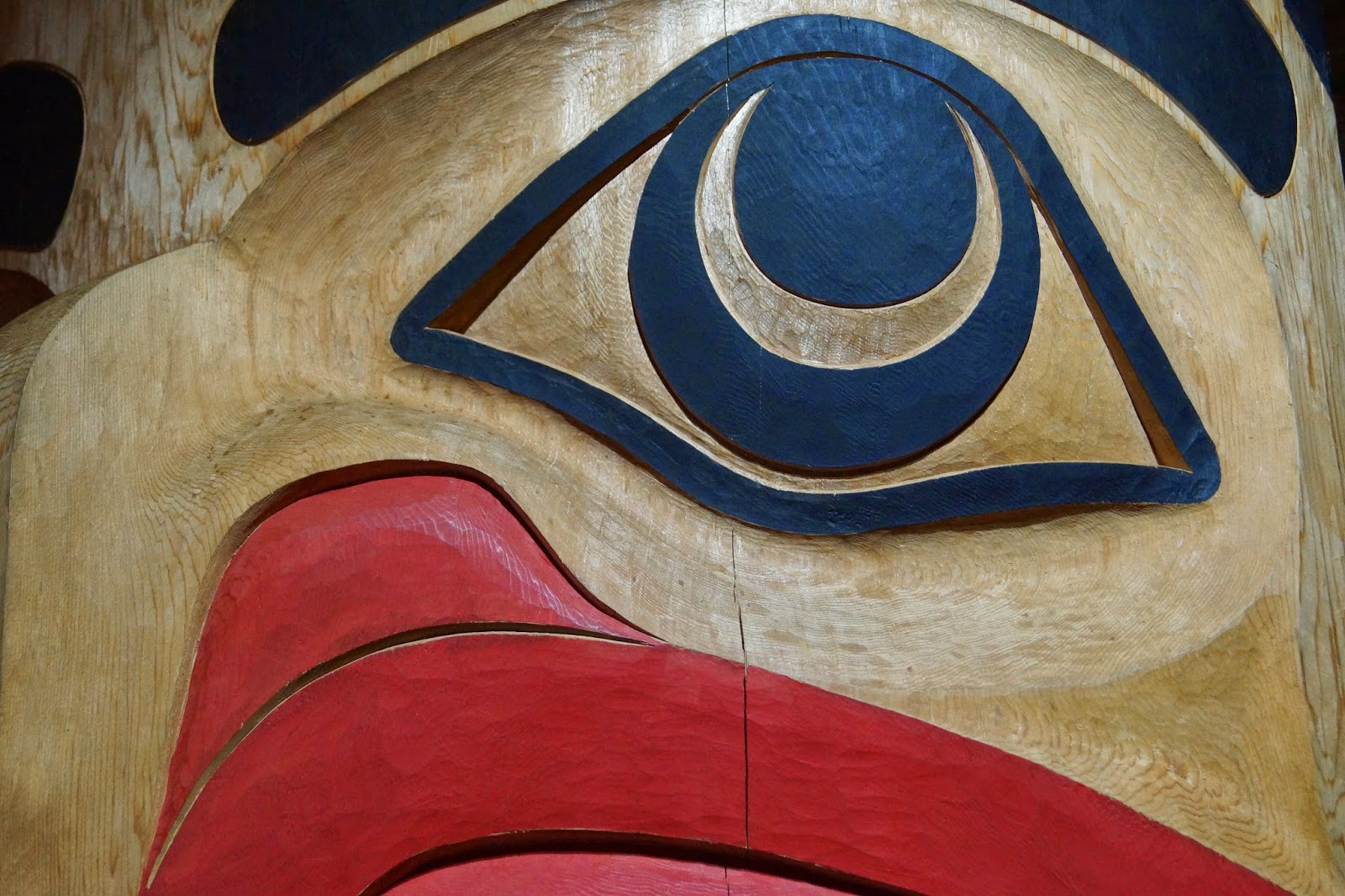 Several of the buildings were structures with turf and vegetation completely covering them. 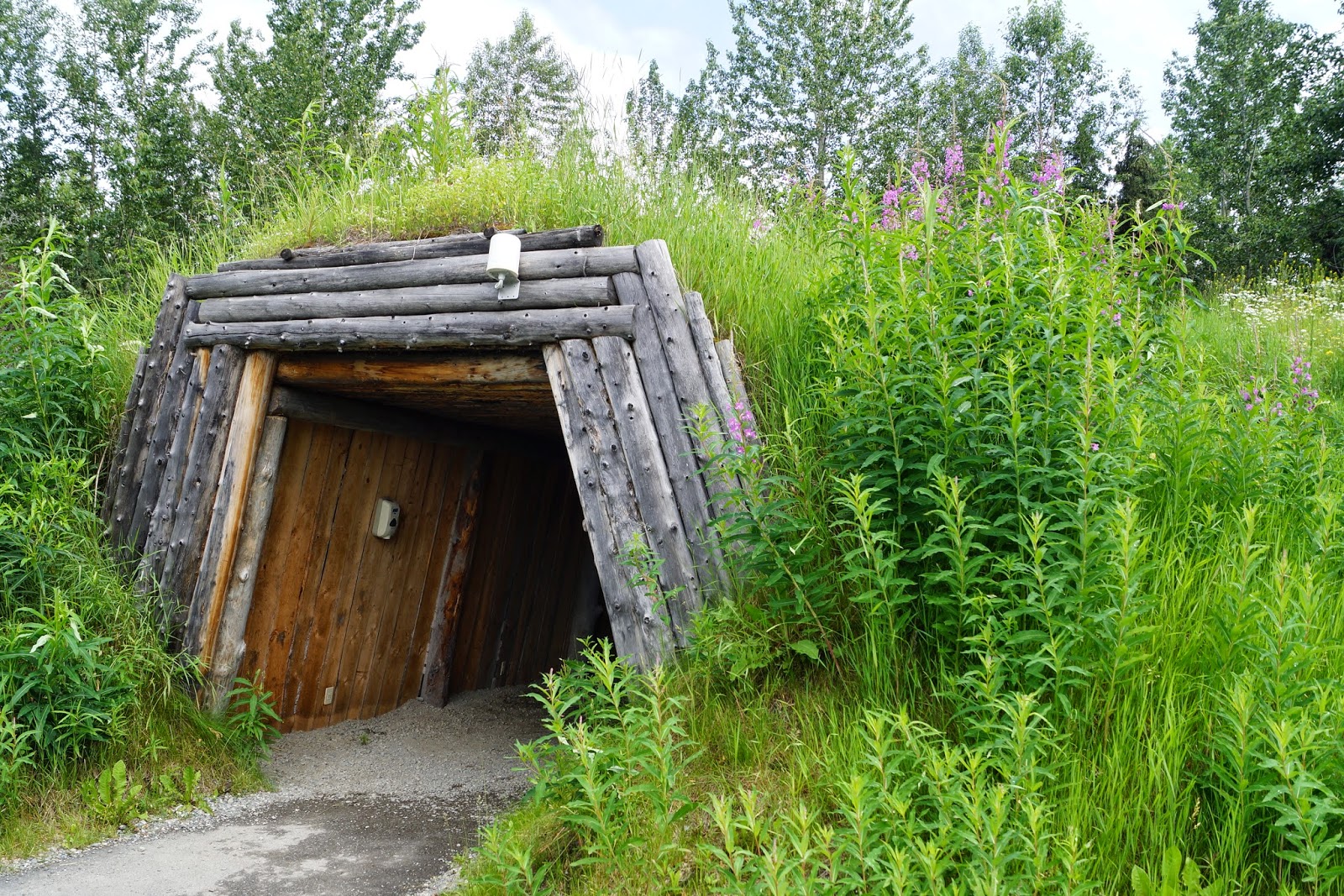 This one had a particularly long curved entrance way to keep the cold wind out. 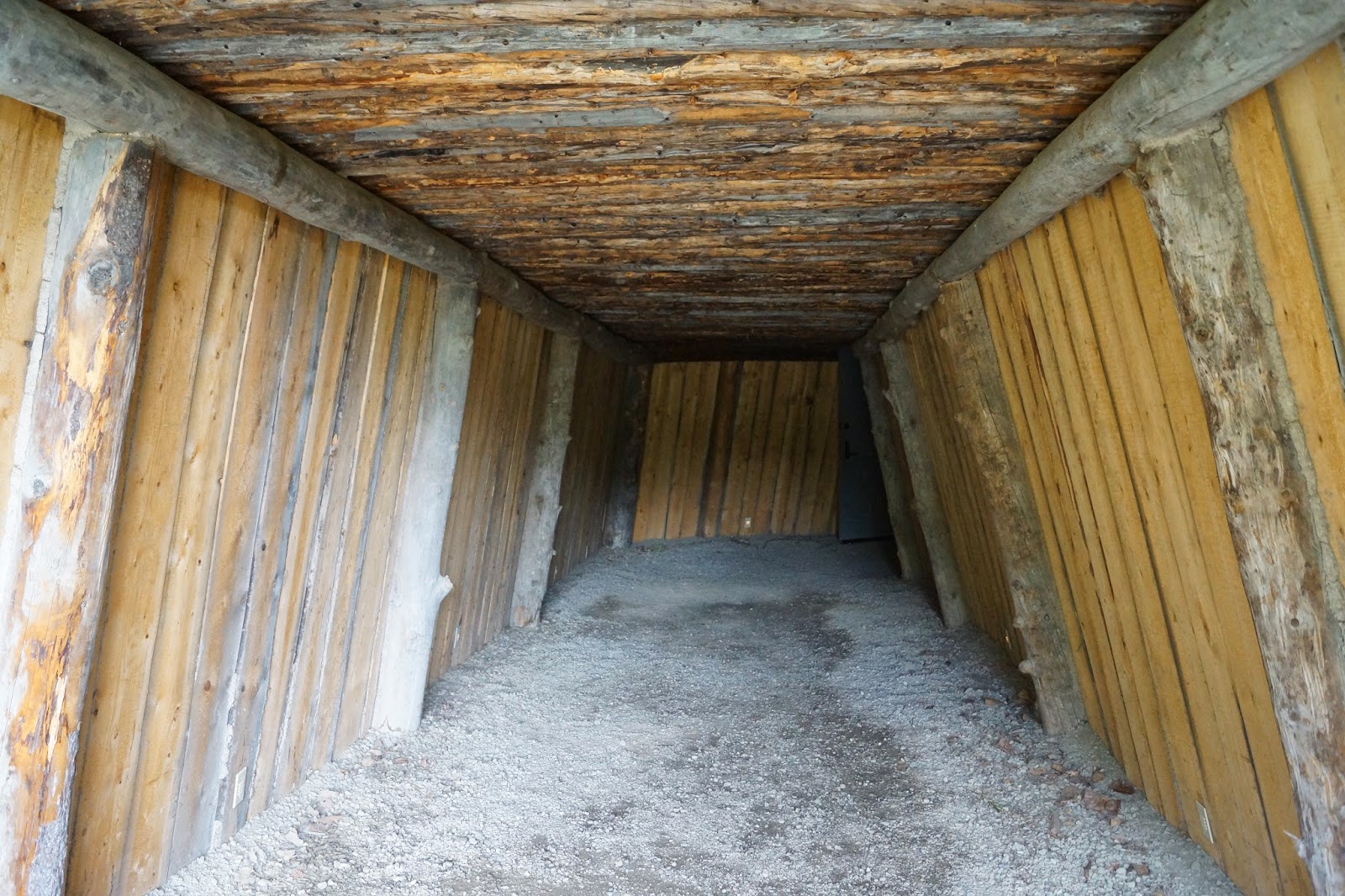 The museum also keeps a dogsled team, most of whom were out working when we stopped by to see their homes. We spoke to one of the women who works with the team, and she explained that the dogs are not huskies (another Alaskan stereotype) but are hybrids of huskies and other dogs well suited to running. I wish I had a picture of the dogs. They were incredibly skinny, and longer legged than huskies. They are kept lean because its easier for them to run if they are not carrying extra weight. They are not underfed; they eat a great deal but because they are working dogs they run it all off, like athletes do. 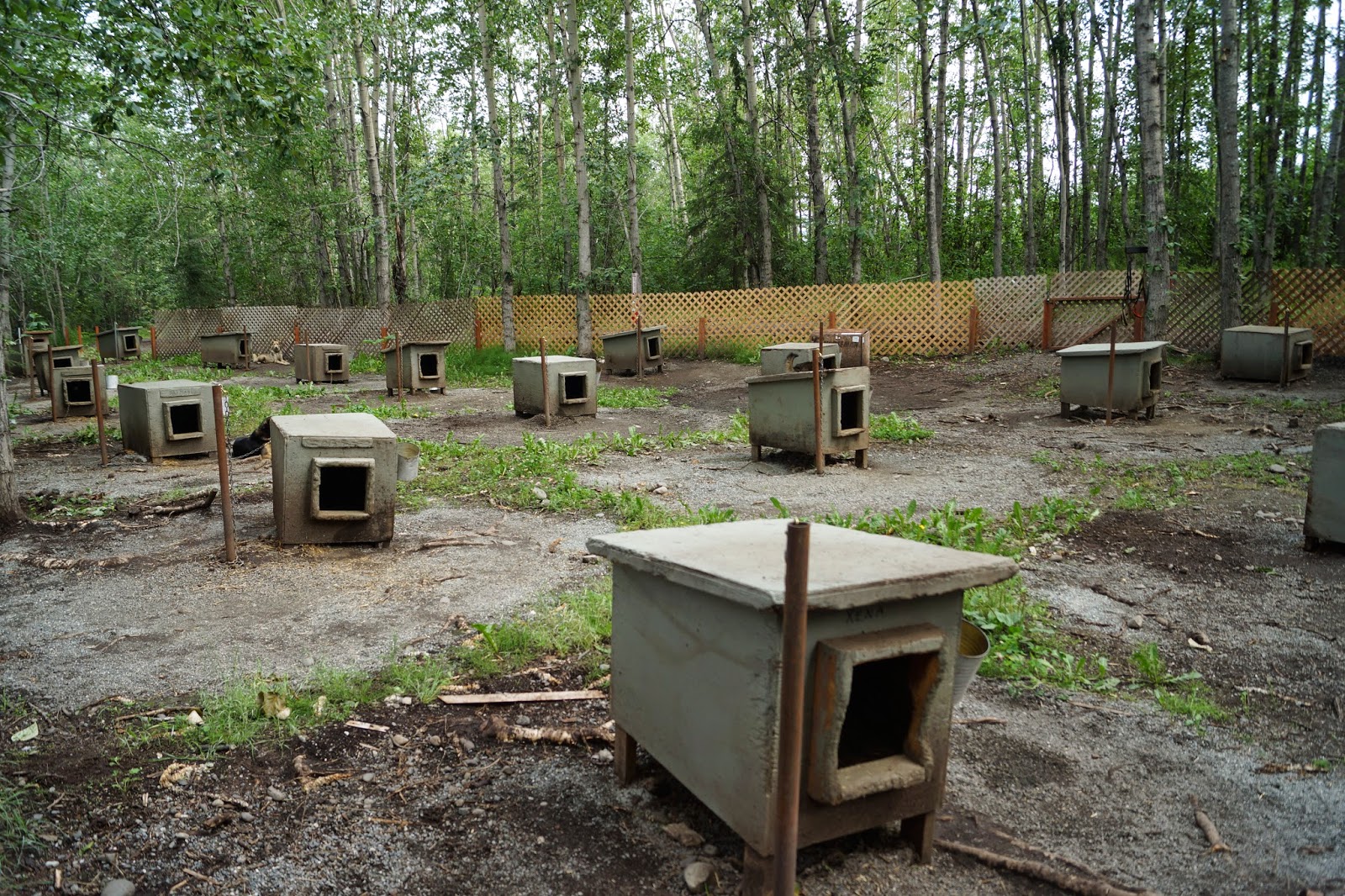 The Alaskan Native Heritage Center has a deal with the Anchorage Museum offering a reduced price and a free shuttle when tickets to both are purchased together. Parking in downtown Anchorage is kind of a bother and can get expensive, so taking the shuttle from the Heritage Center is a convenient way to avoid that hassle. But we didn't have the energy for another museum on that day, so we passed on the shuttle.

The Anchorage Museum is an impressive structure on a nicely landscaped campus downtown.

It houses historical, cultural, scientific and artistic displays about Alaska and Anchorage in particular.  A temporary exhibit, entitled Gyre: The Plastic Ocean displays the works of artists who explored the huge deposits of plastic waste spiraling in each of Earth's oceans, and made art in response. 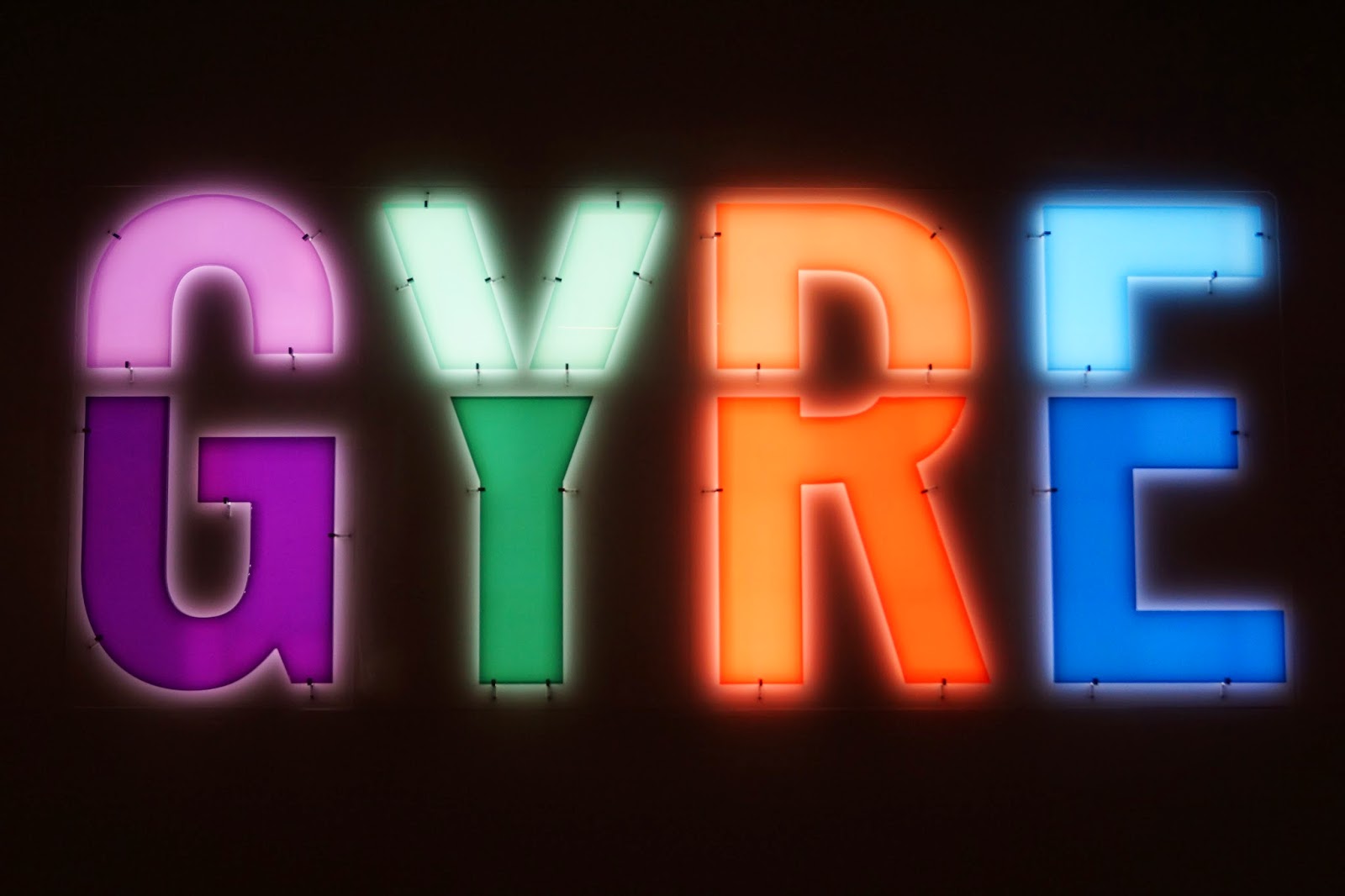 I personally found the exhibit moving in a disturbing way, but also admired the artists' abilities to express their reactions in imaginative, informative, humorous, profound, and painful ways.  They all used materials found in the gyre, and the amount of diverse plastics used was horrifying and amazing. 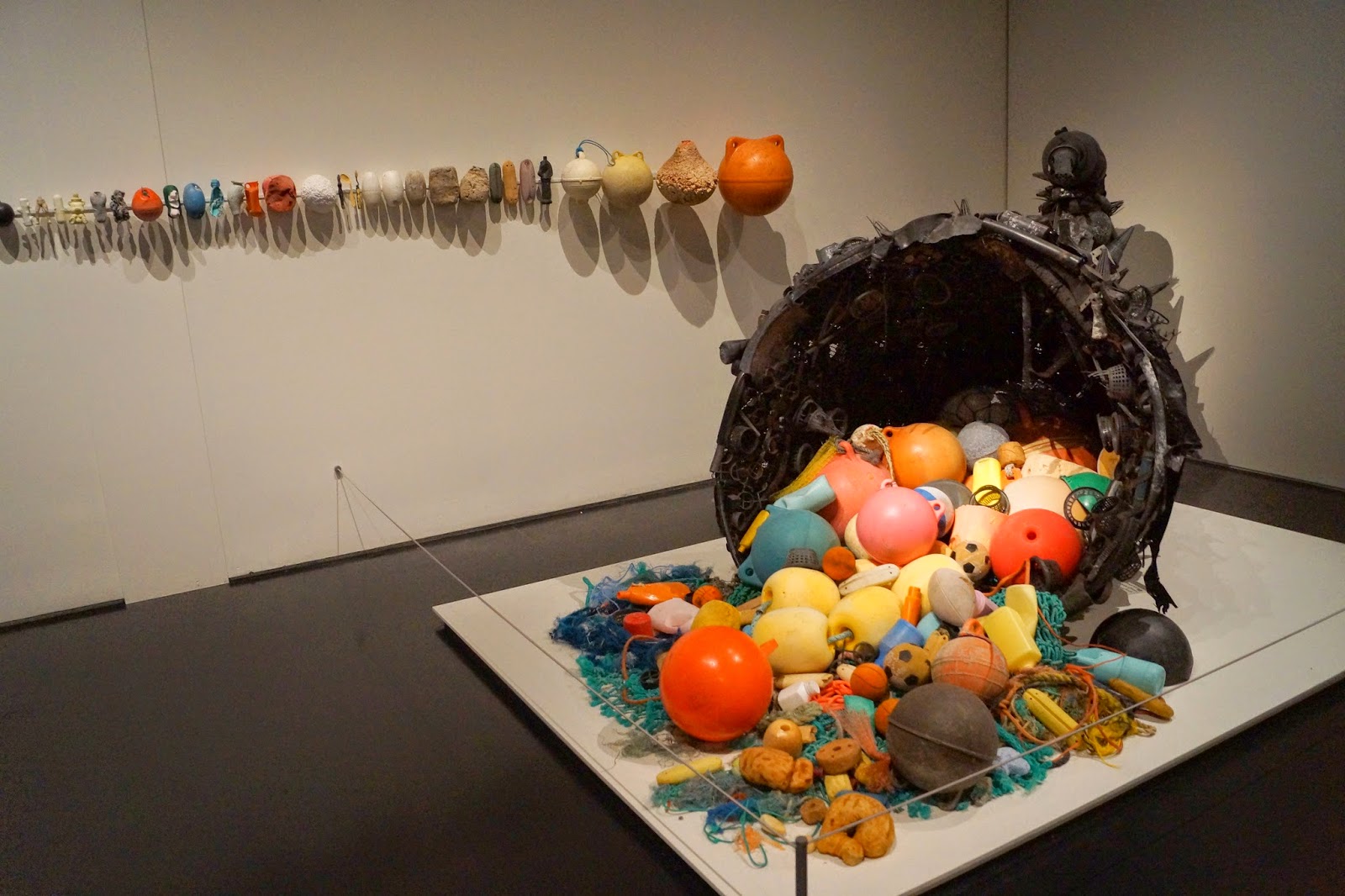 On a totally different note, they had an exquisite display of Native artifacts, beautifully displayed.  Below is a functional parka made completely of bird skins, complete with all their feathers.  Throughout, the use of "found" materials was strikingly similar to the artists' works in Gyre, but so beautiful and inspiring, instead of so ugly and disturbing. 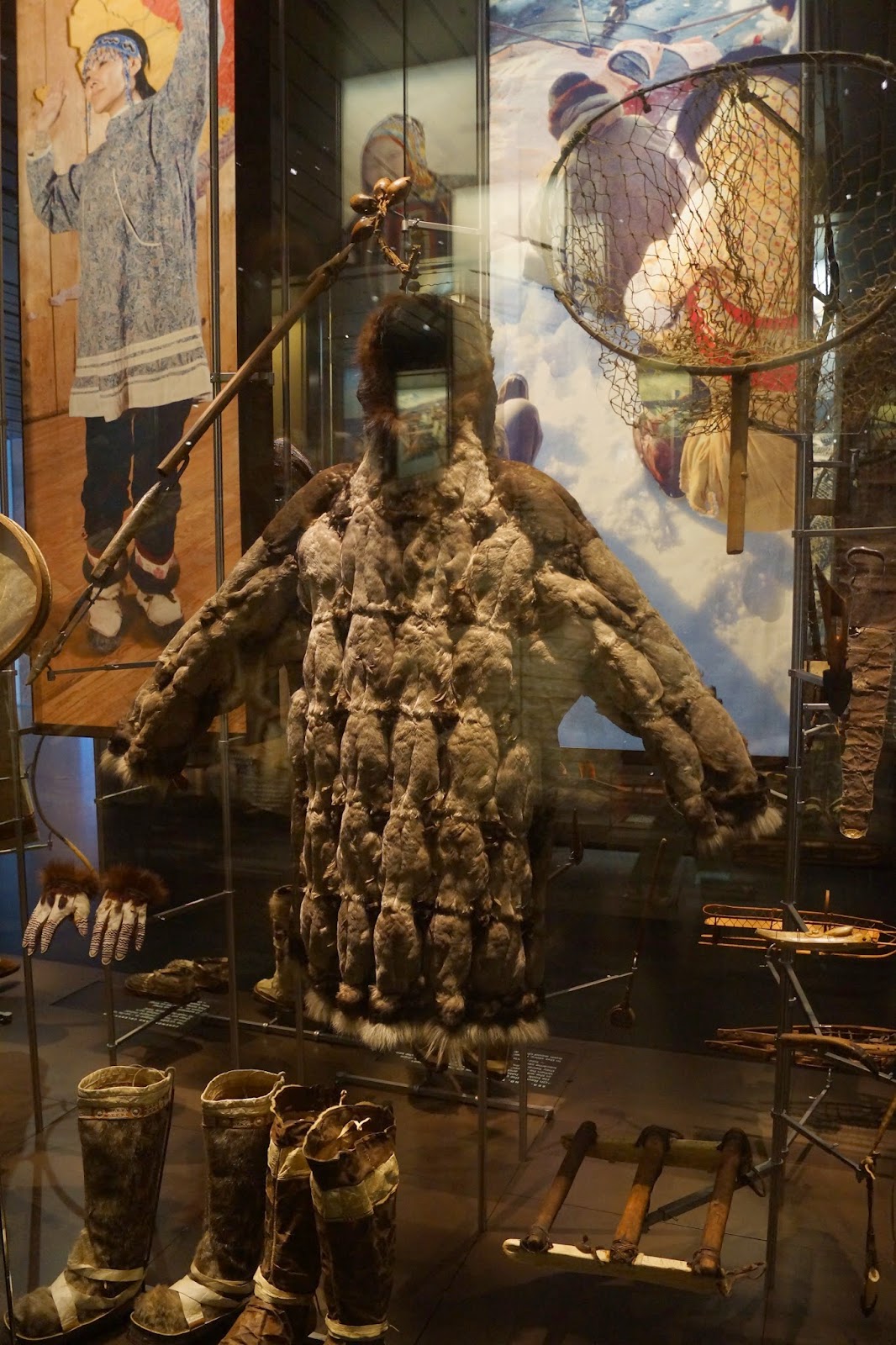 We took a delightful lunch break in the Museum's restaurant, called Muse. It was a fun, aesthetically appealing, urban experience with delicious and not too pricey food.  Great decision. 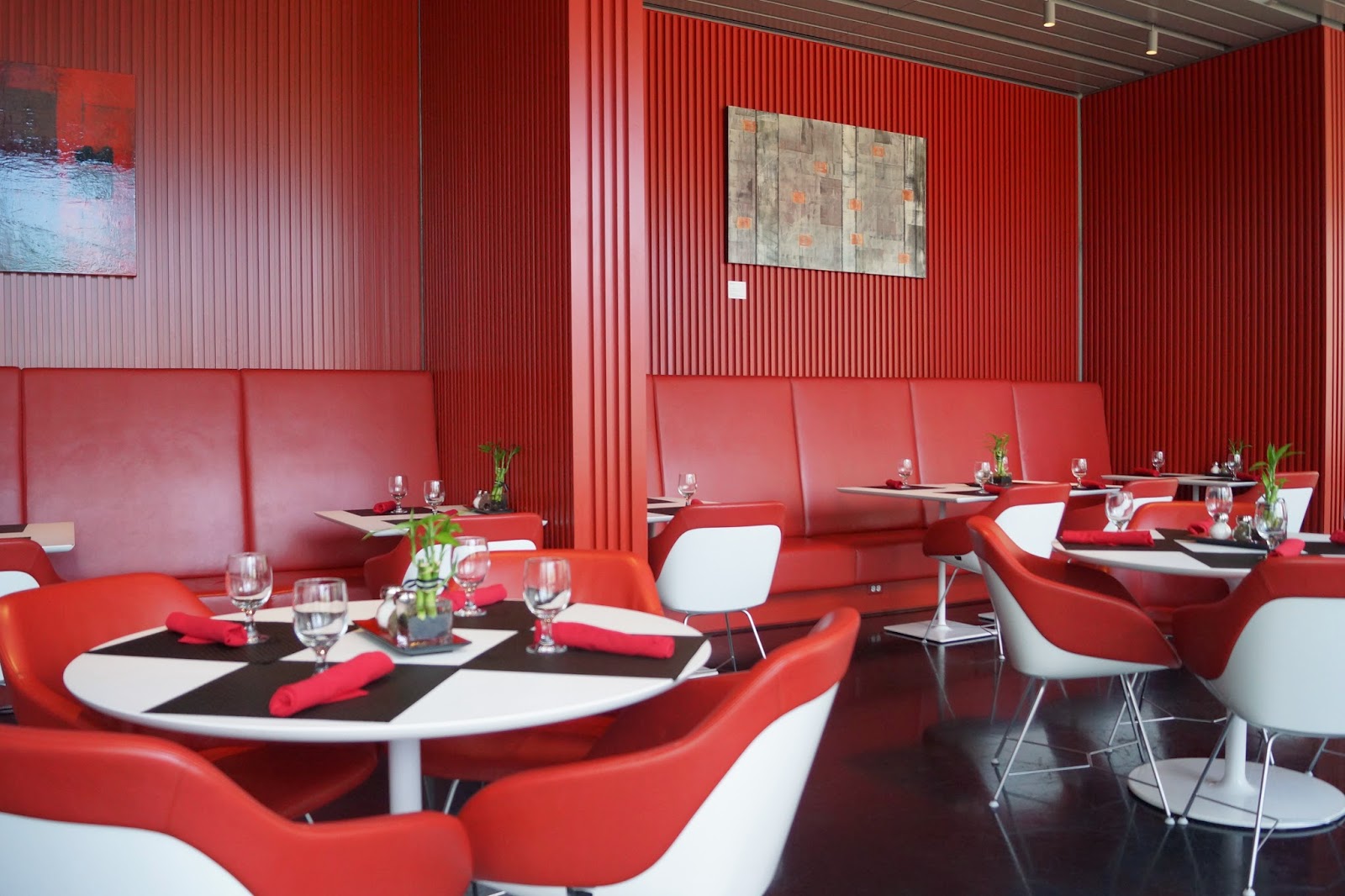 After lunch we tackled the Alaskan history and art, and the hands-on science sections of the museum.  Here are a couple of my favorite items. The first is Eskimo Drummer by Lawrence Ahvakana. 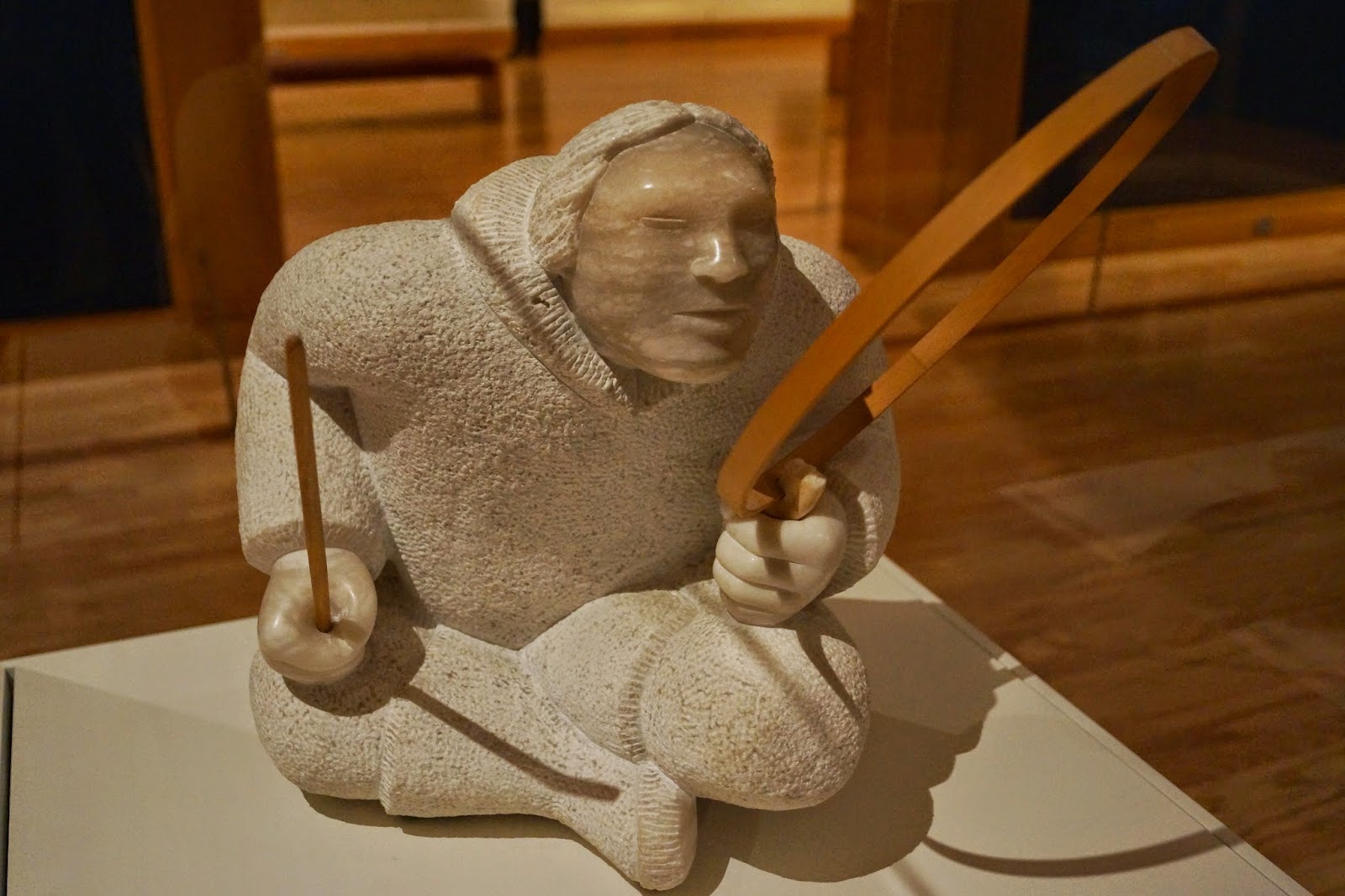 And this is "Radio Babies" by George Ahgupuk, a delightful Native artist who depicts Alaskan life.  This picture shows a doctor speaking over the radio to a mother delivering a baby alone in the distance, and the baby flying over the radio waves. 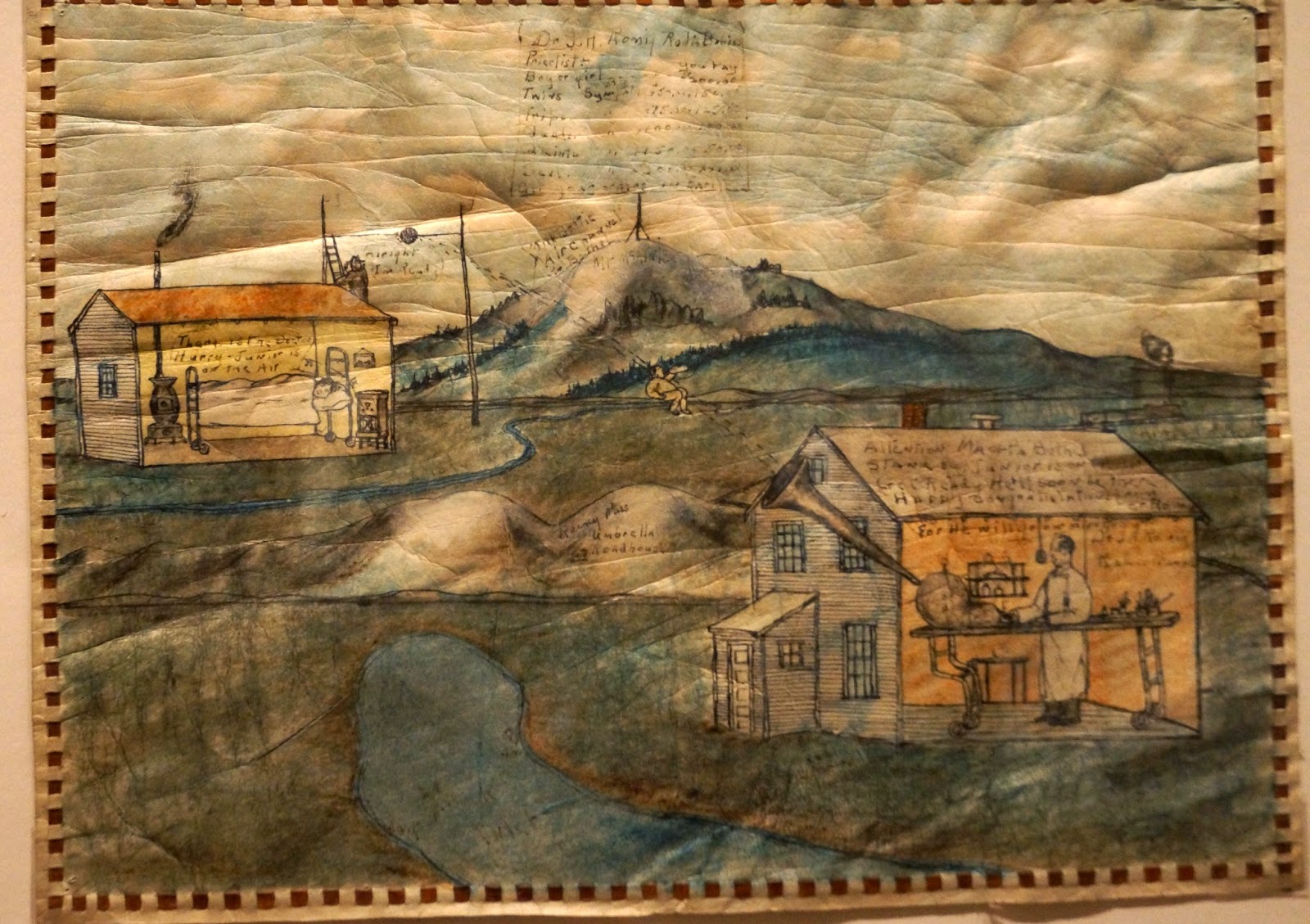 We finished up our visit with the Discovery Imaginarium - a huge couple of rooms filled with hands-on science exhibits for all ages.  This one was fun: a large ball maze that has a few opportunities to impact the path and speed of the balls, as well as add balls when they come out in various places. 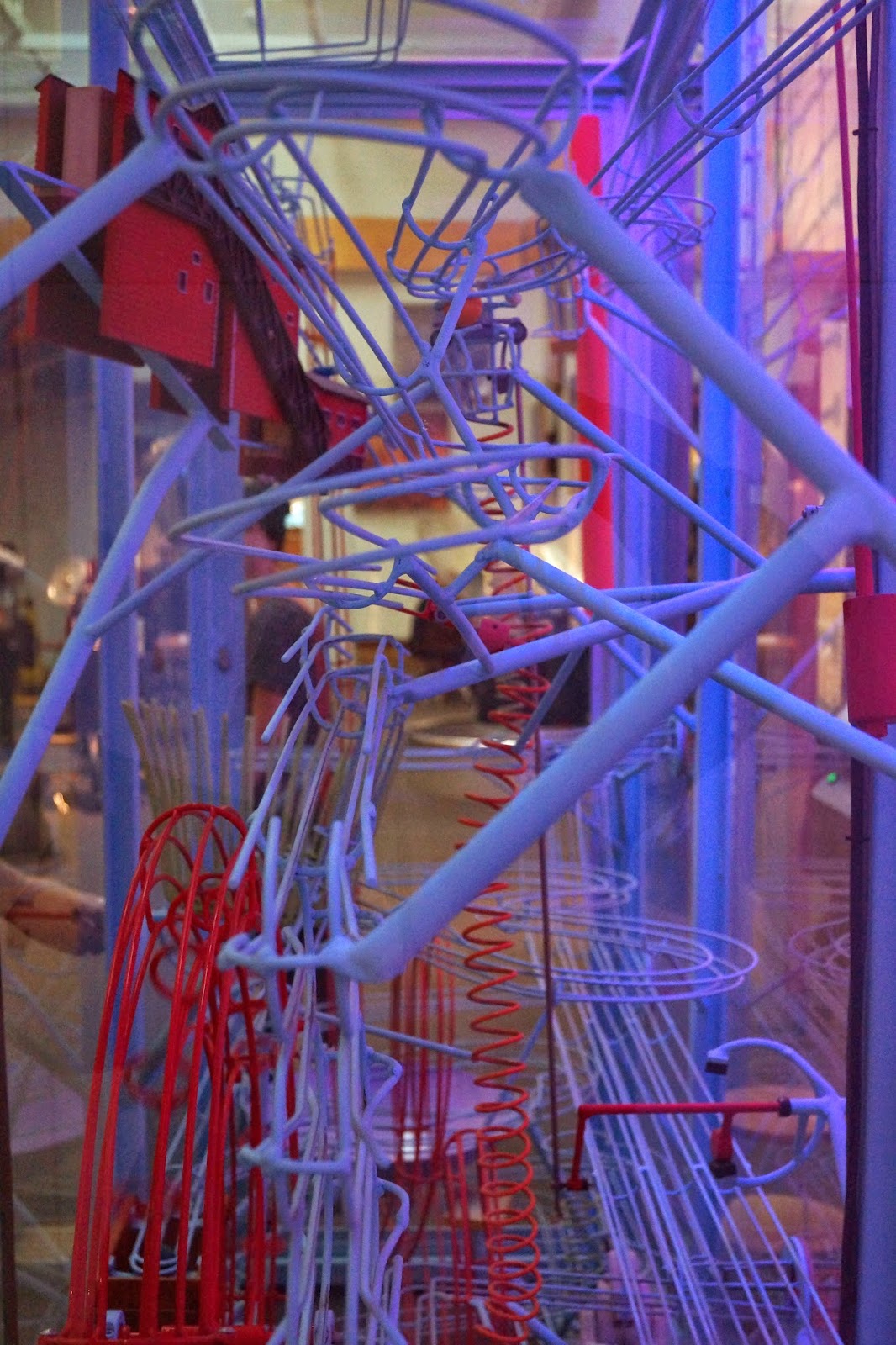 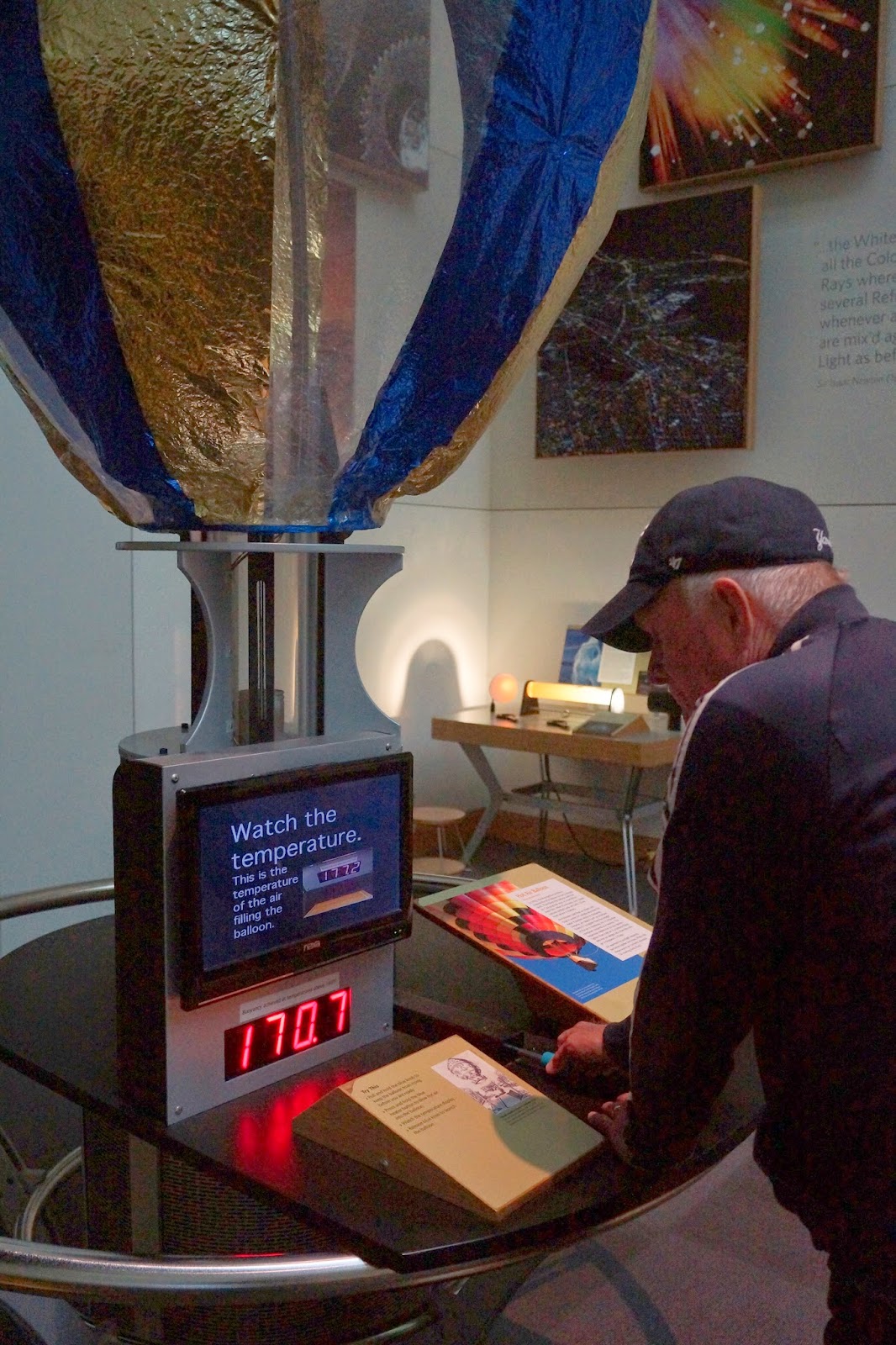 Another day I took a long hike in Kincaid Park by myself in the evening (I know it looks like midday) and ended up literally face to face with several moose at different points along the walk.  You turn the corner and there's a moose in the trail just chomping on the veggies. 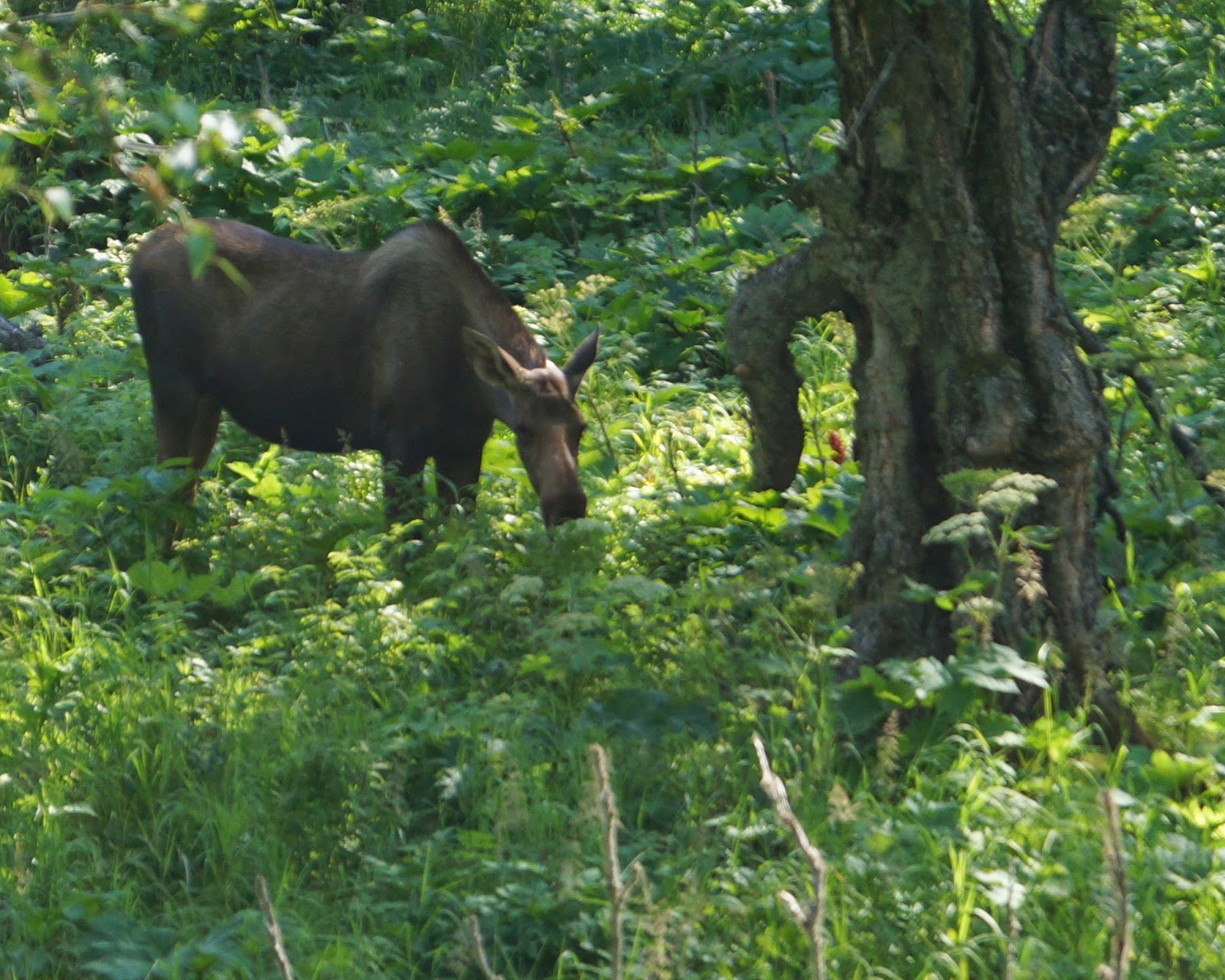 The females hang out in Anchorage to calve because it's safe from predators.  I ran into this mom and her baby and had to wait on the path looking unthreatening for some time before they turned away and I felt safe to pass by.  I think I saw five all together on that hike, including a big bull. Like I said, if you want to see moose, go to Anchorage. 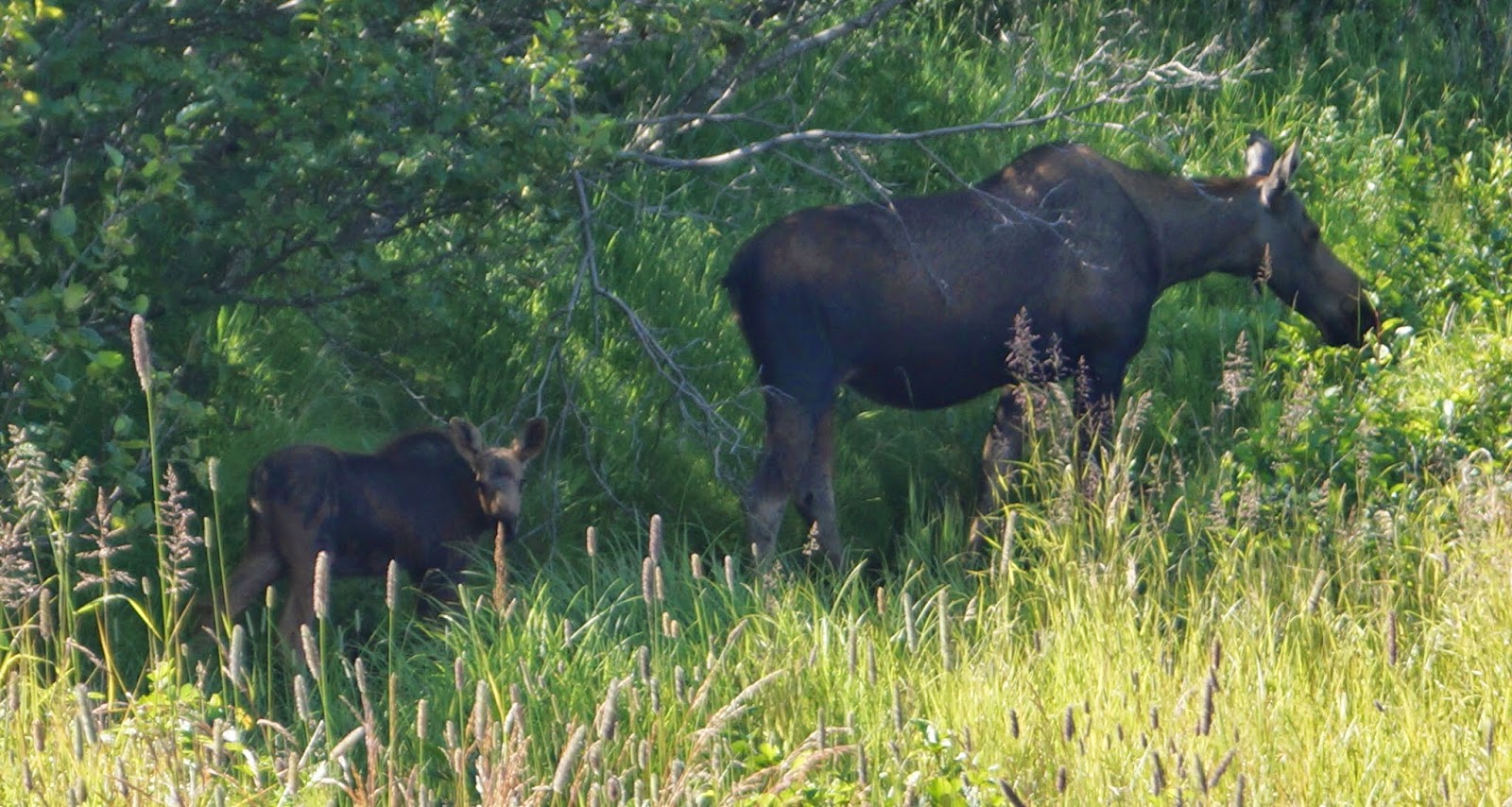 The days were long and just as relaxing as we hoped. This picture was taken at about sunset, which was at 11pm.  It was hard to stay up to get a sunset shot! 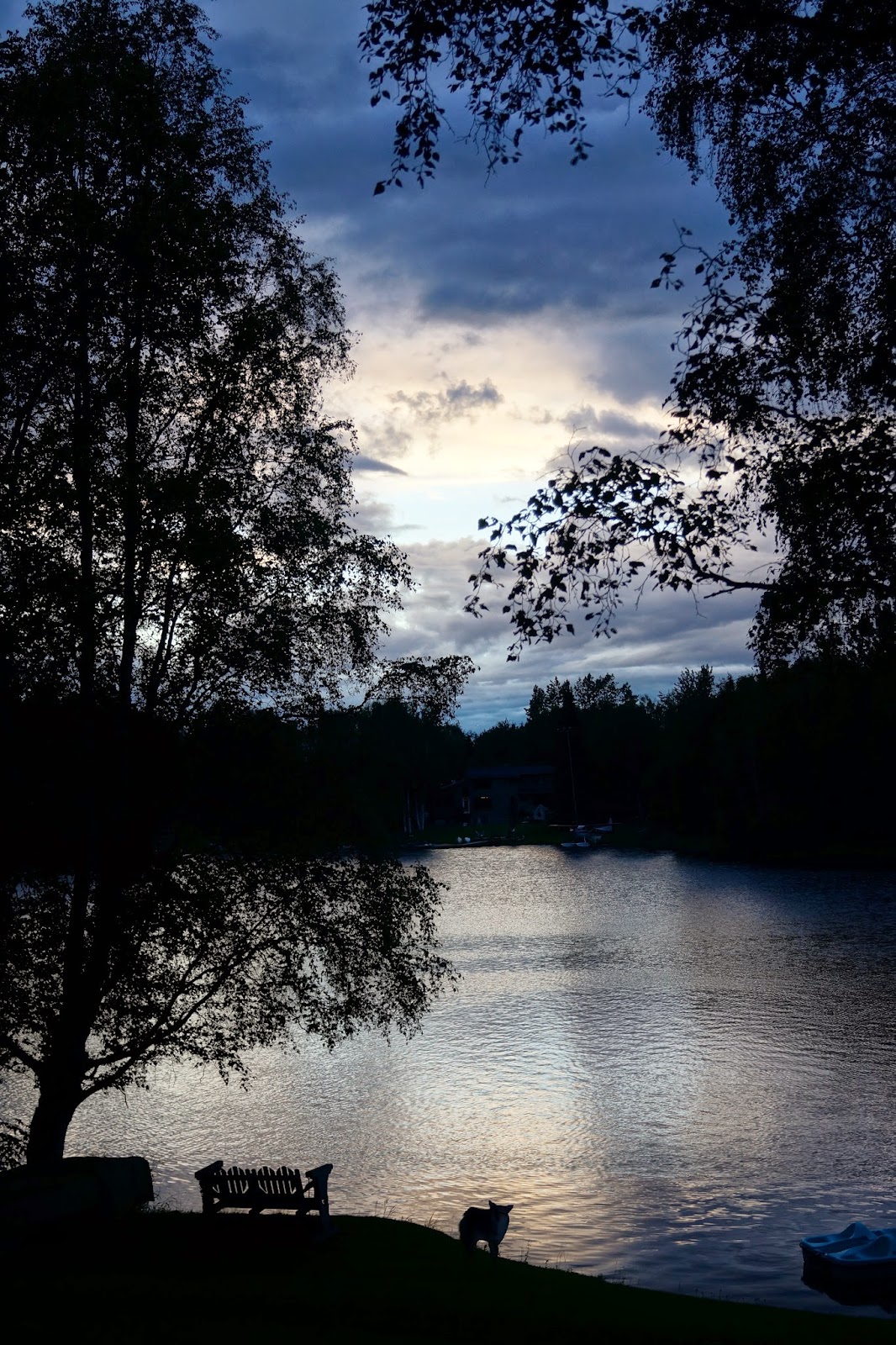