What the Humans Did on Valentine's Day


For Valentine's Day, Lynn and I surprised our husbands, Glenn and Rick, with a tandem flight in a glider or sailplane at Sky Sailing in Warner Springs, CA.  They had been talking about doing this for weeks, trying to gets us women interested in it. Lynn and I thought it was time to just get on with it, without us. The guys thought they were taking us to Julian for lunch, but we pulled into the glider airport in Warner Springs along the way, and said "Surprise!"

The experience begins (after signing all kinds of paperwork) by meeting the pilot and helping him pull the glider out onto the runway. Gliders, or sailplanes have no engines, so they are dependent on human power while on land or a tow plane to taxi and take-off.


A glider is really tiny, as the guys were about to find out. The pilot sits in this cockpit... 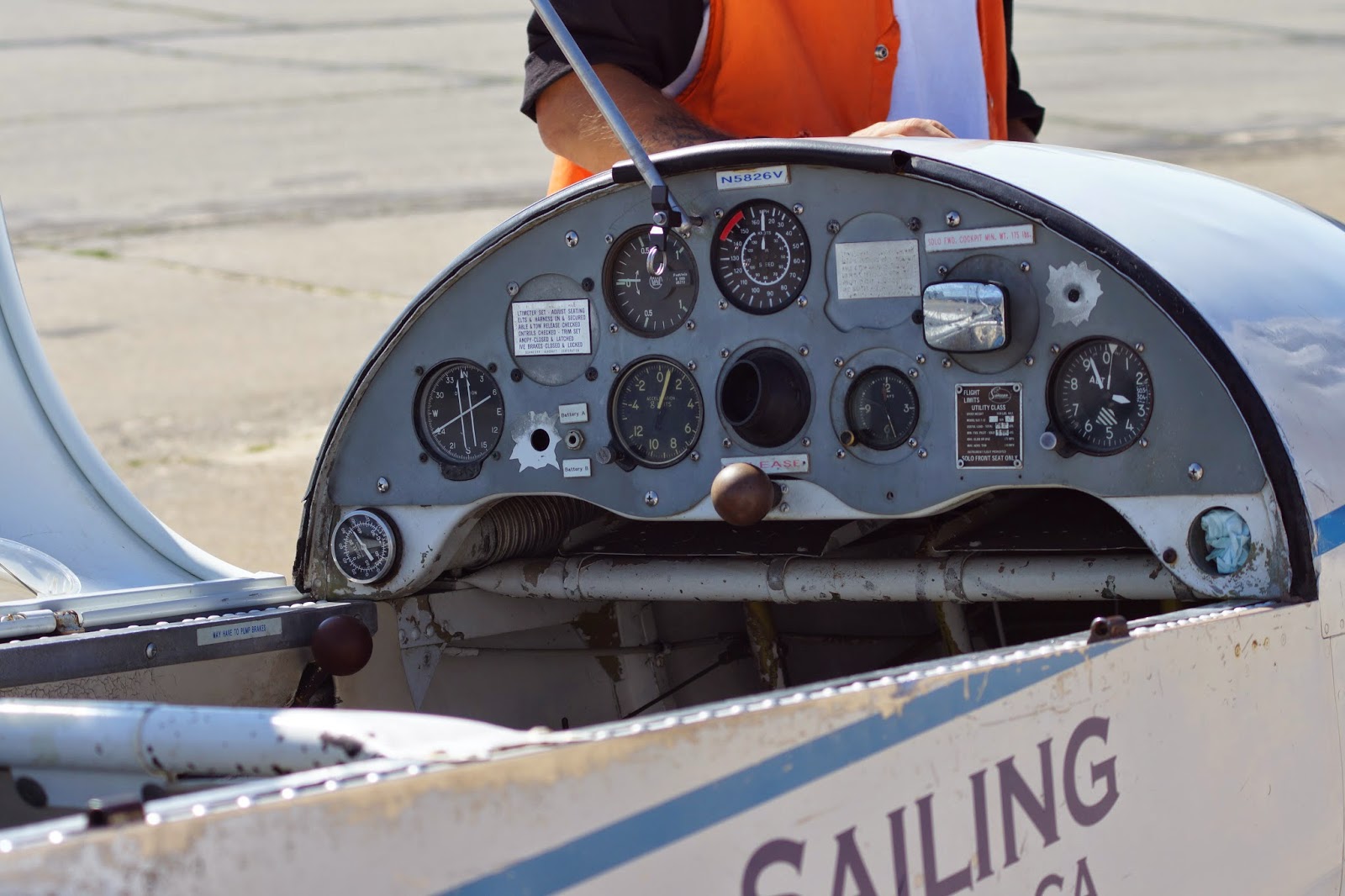 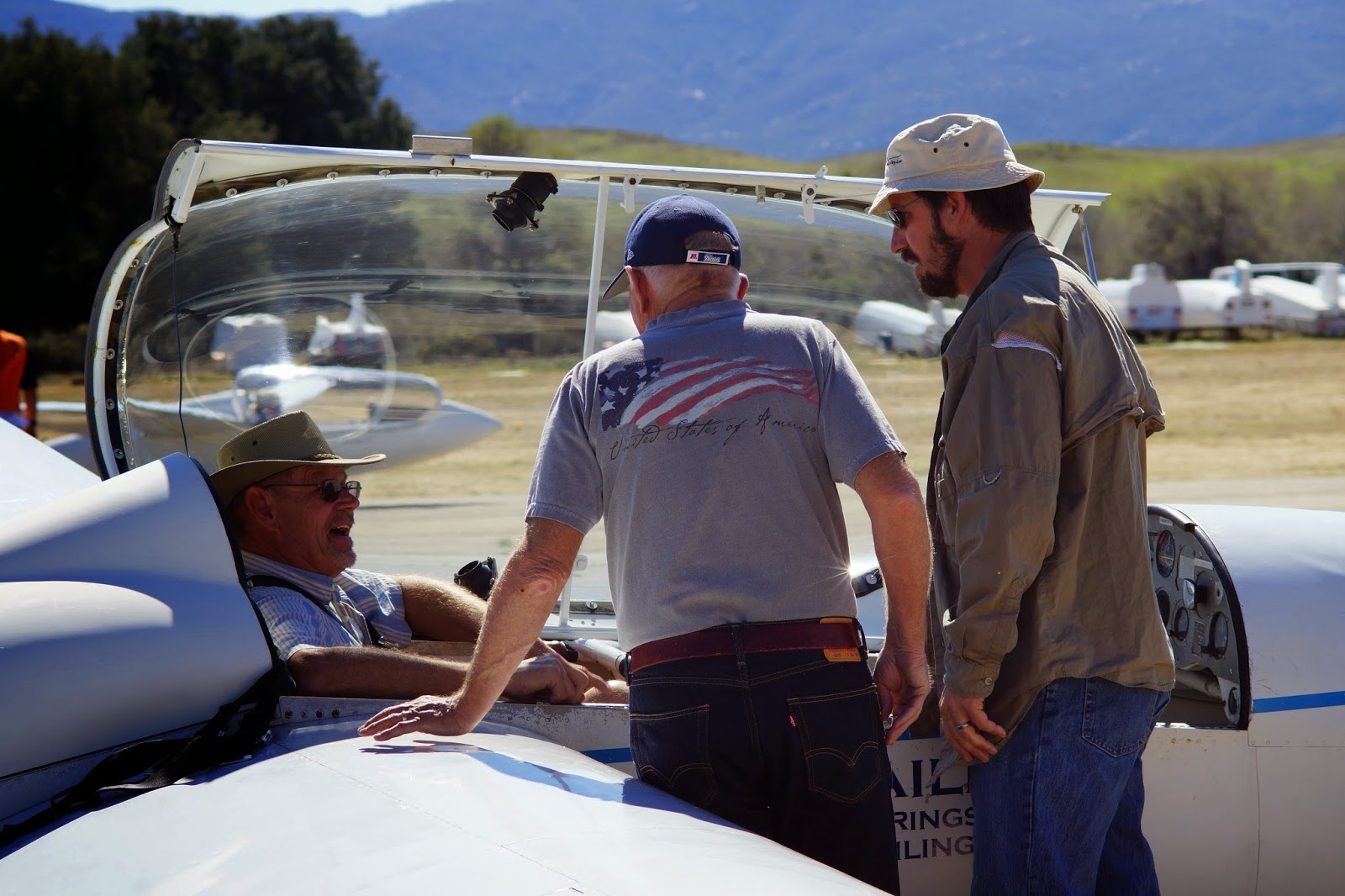 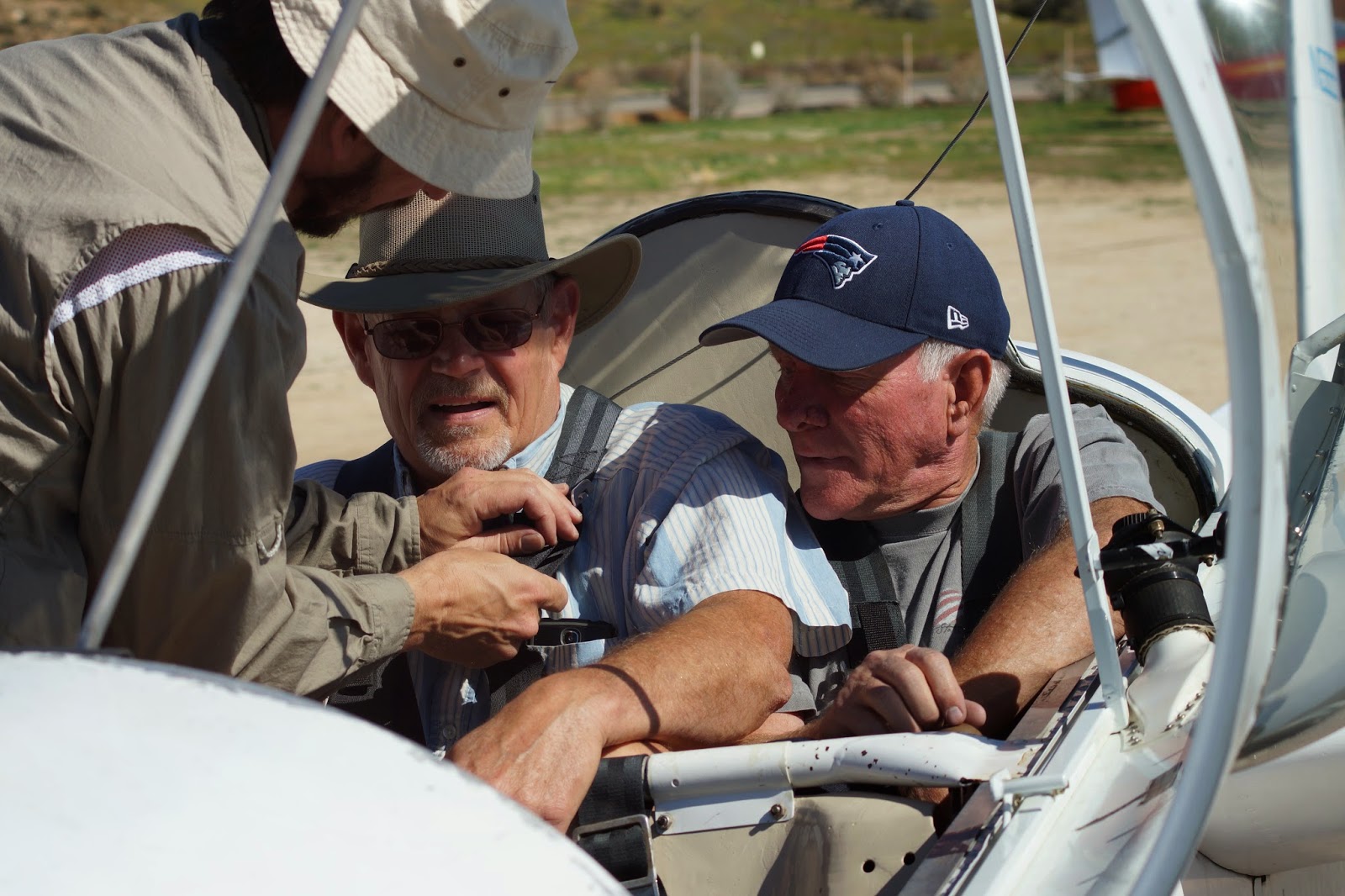 Both of them, side by side behind the pilot in a seat that rivals the tilt-a-whirl for cozy with your neighbor.  Believe me, the jokes were flying faster than the plane.

The glider is attached by a cable to a small tow plane in front, which pulls it down the runway and into the air.

The company, Sky Sailing, mounts a Go-Pro on the wing of the glider that takes a picture about every 30 seconds.  The next four shots are from the complimentary jump-drive of photos they gave us at the end of the flight.

Below you can see their glider behind the tow plane, just before the pilot told Rick to pull the cable to release them from the tow plane. (Can you see the crescent moon in the clear blue sky? It was a picture perfect day,) Once the cable is released, the glider sails on the air currents, circling around, with great views of California in every direction, until it's time to come down.

Their flight lasted about 20 minutes. The pilot told them that during the summer, when the hot air is rising, the gliders can fly for hours! Meanwhile, Lynn and I watched Honey and her new friend Lady play, so we missed the landing. Needless to say it was a smooth one and we all headed on to Julian for a great pet-friendly Valentine's Day lunch at the Julian Grille.  (Thanks guys.)

Honey has a Play Date on Valentine's Day

Get ready for an onslaught of adorable puppy pictures. We met Lady, a 10 week old German shepherd, by surprise on one of our human outings. At the time Honey was 11 weeks old, and the younger Lady was almost twice as large, and quite beefy for a puppy.

The approach was gradual, as they sized each other up.

Honey went into seductive submissive mode to get the play started. 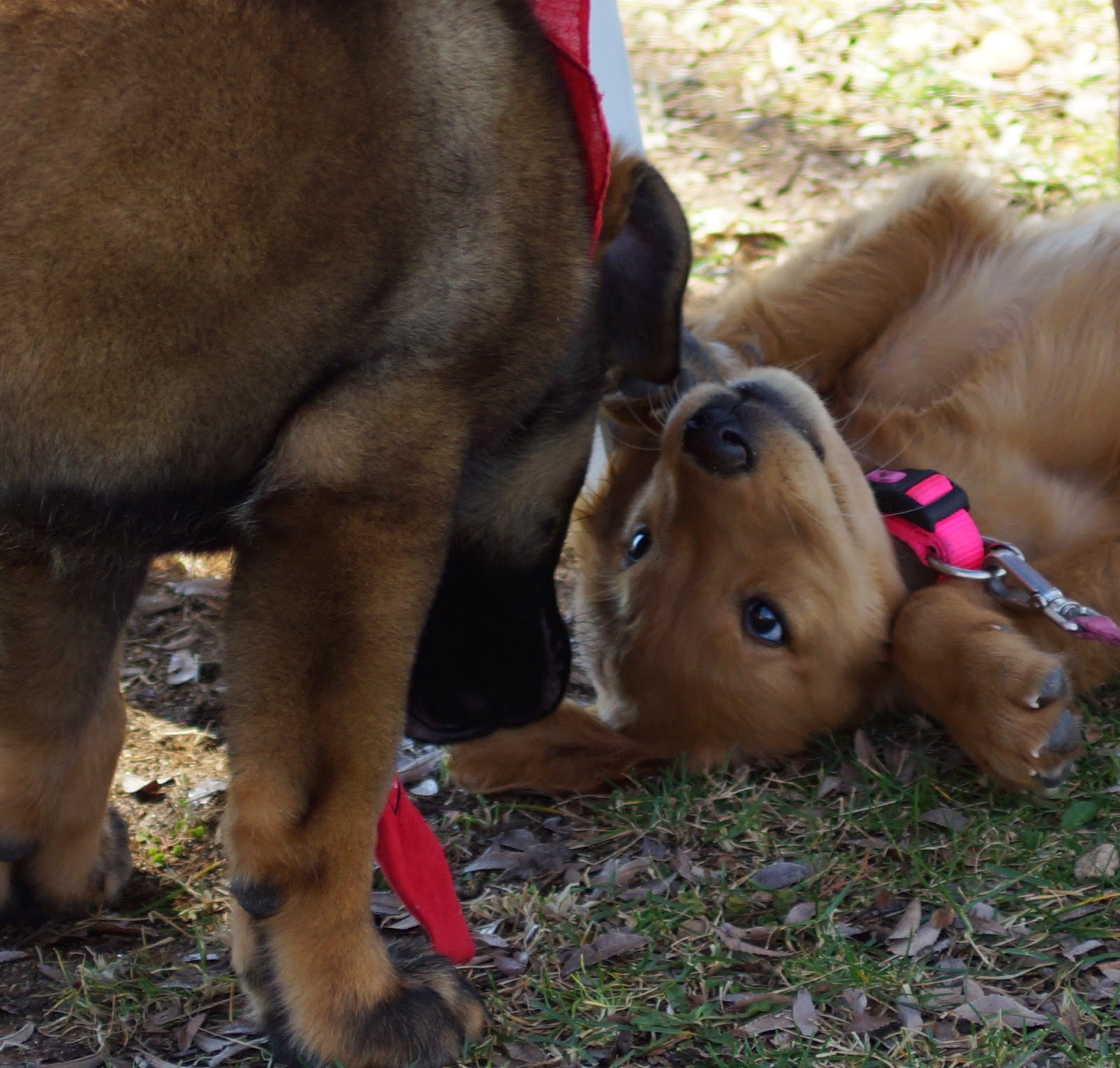 It took a little time, because this was Lady's first encounter with any puppy other than her litter mates. Honey was an old hand at this already, having played 2-3 whole times with other dogs. She really laid it on and eventually it worked.

Lady got the upper hand right off. No surprise. That was part of Honey's plan. 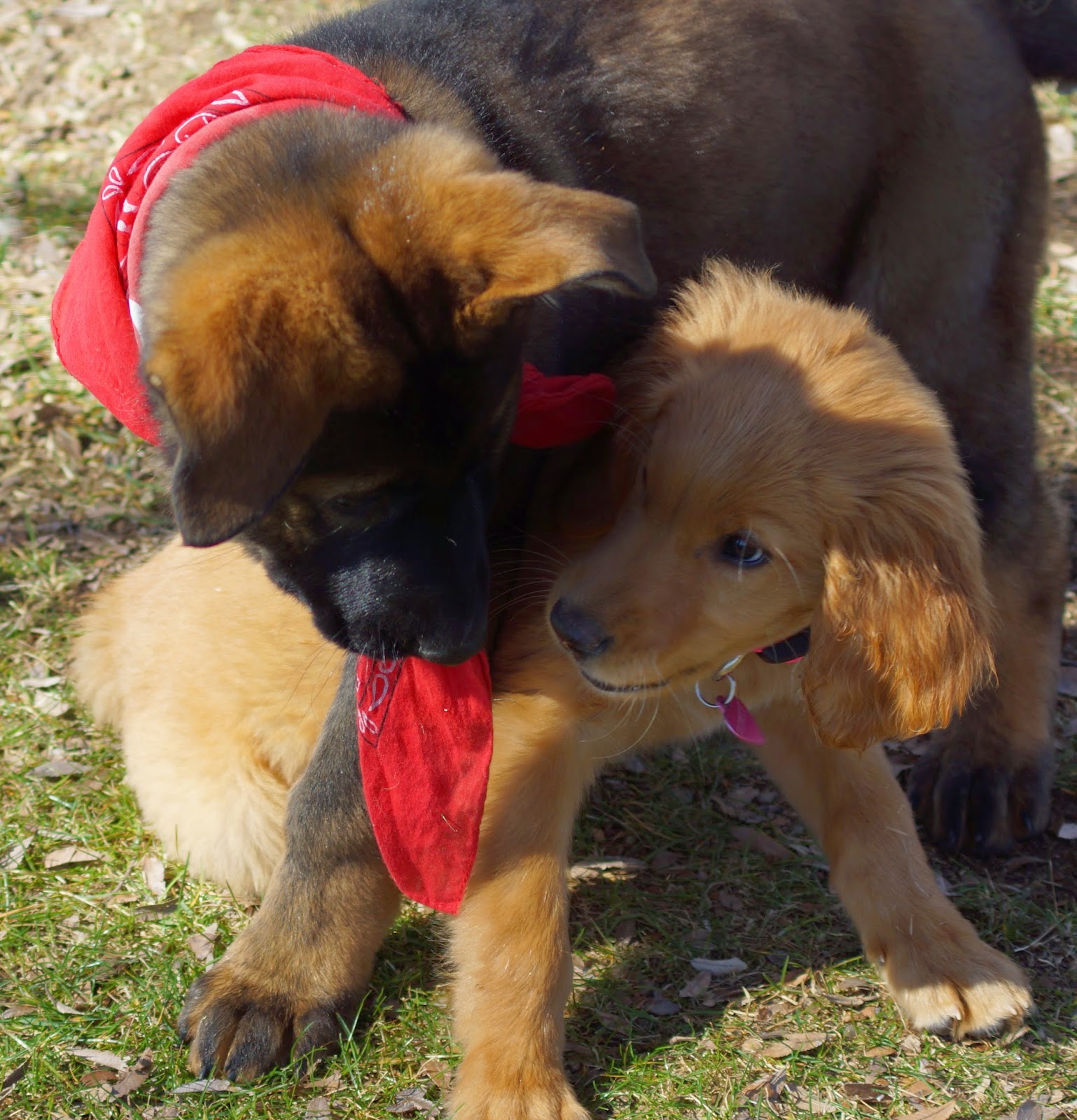 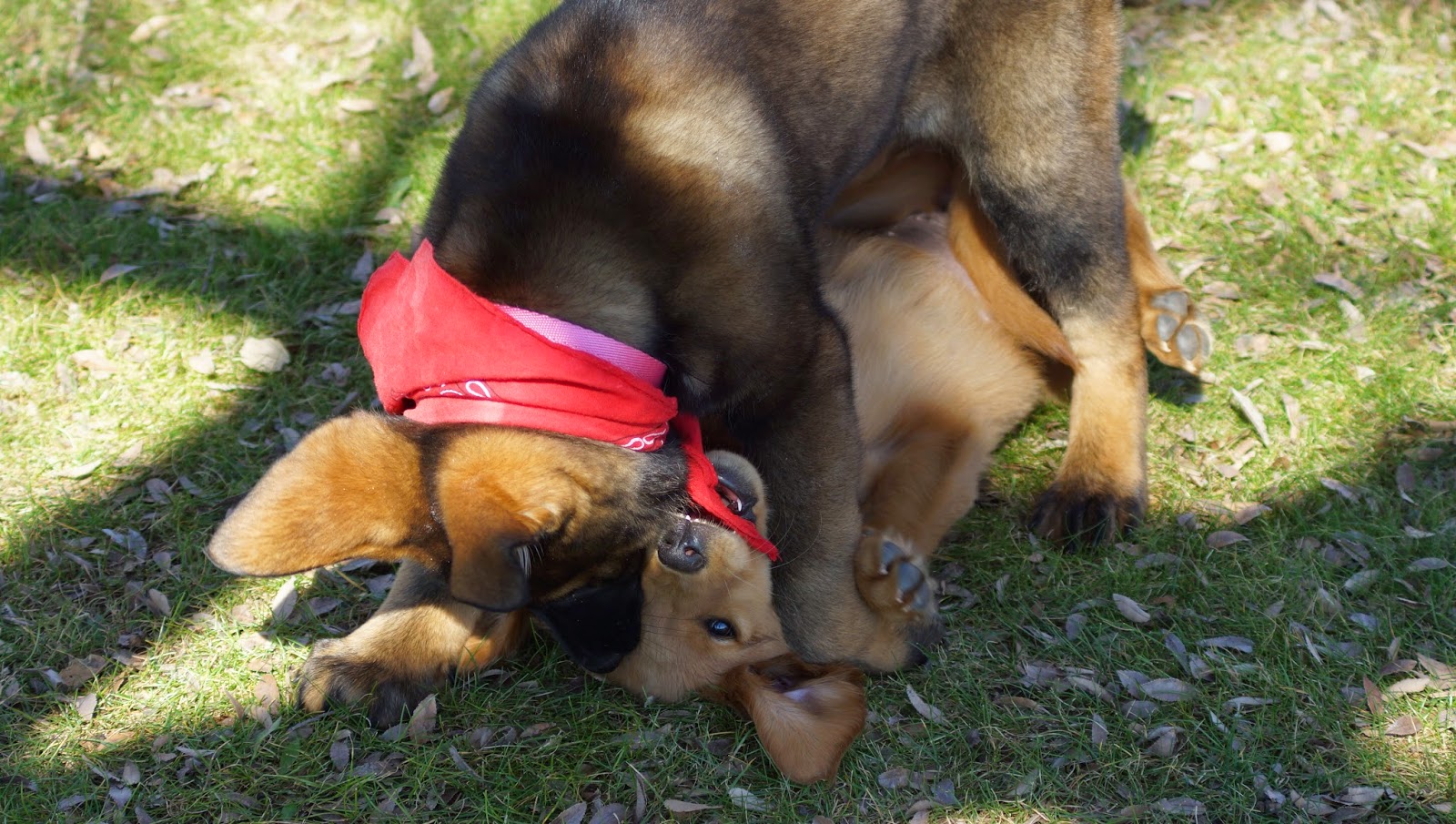 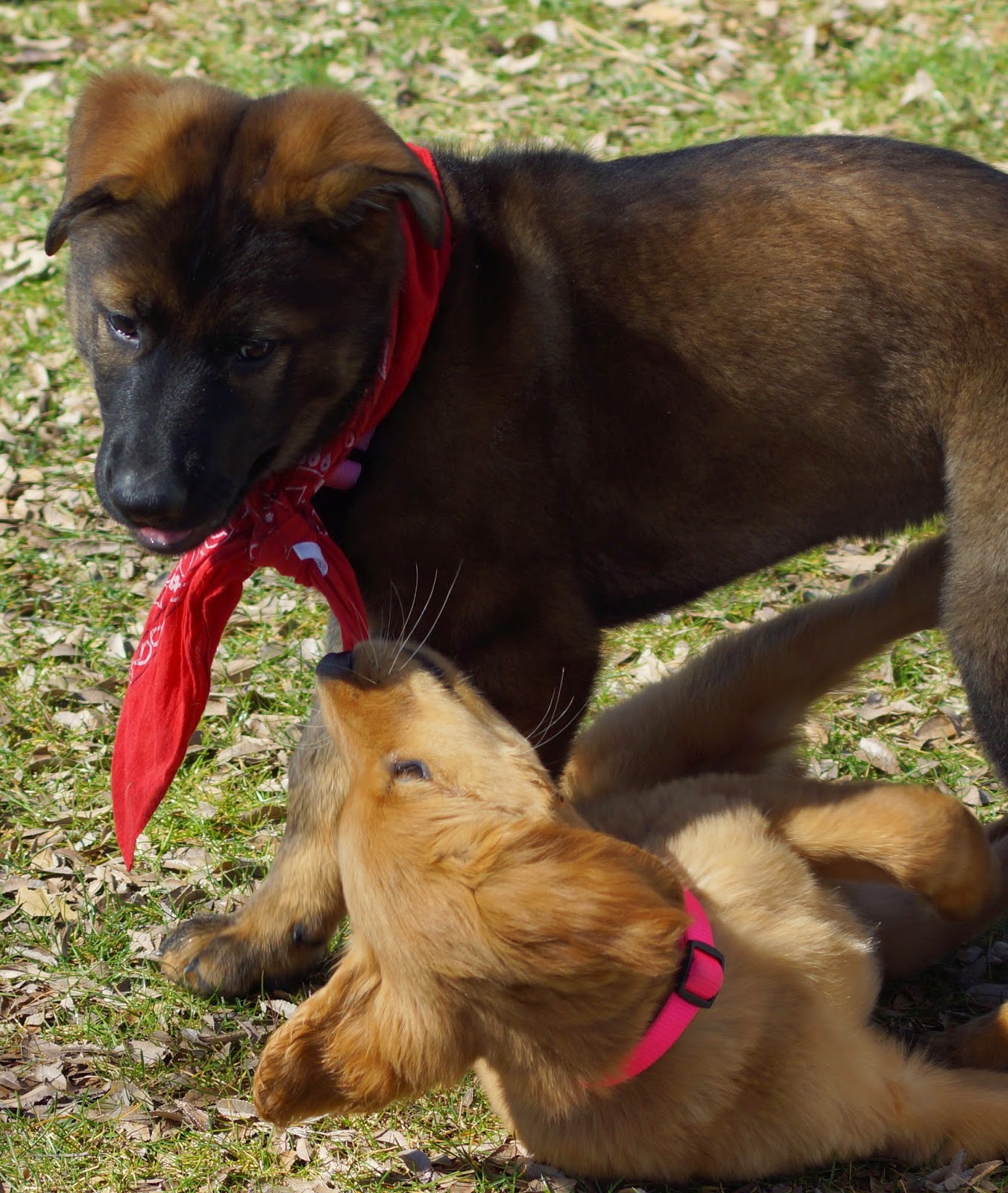 But it didn't change the odds much. 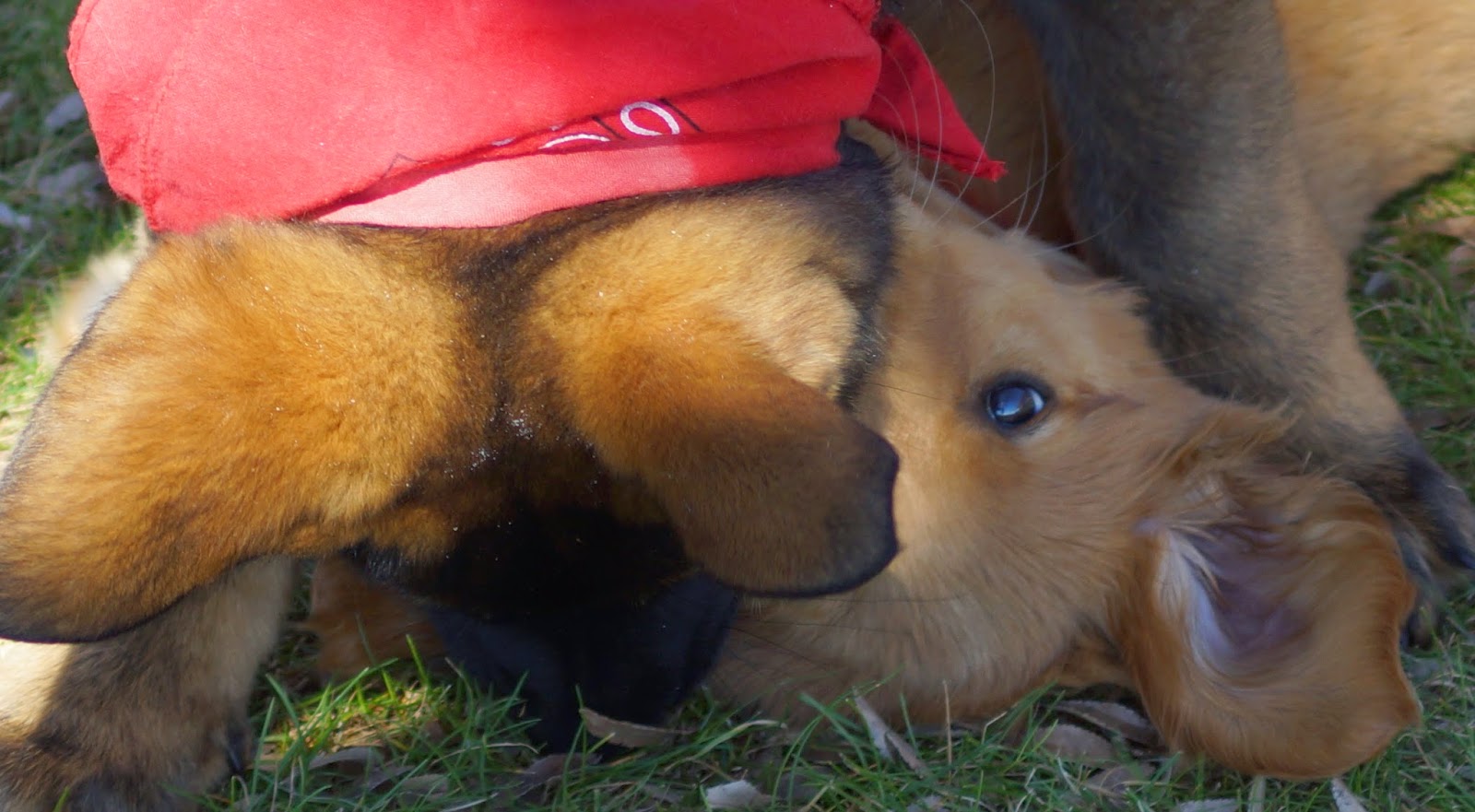 Then she was up on her feet and the odds began to even out. Go Honey! 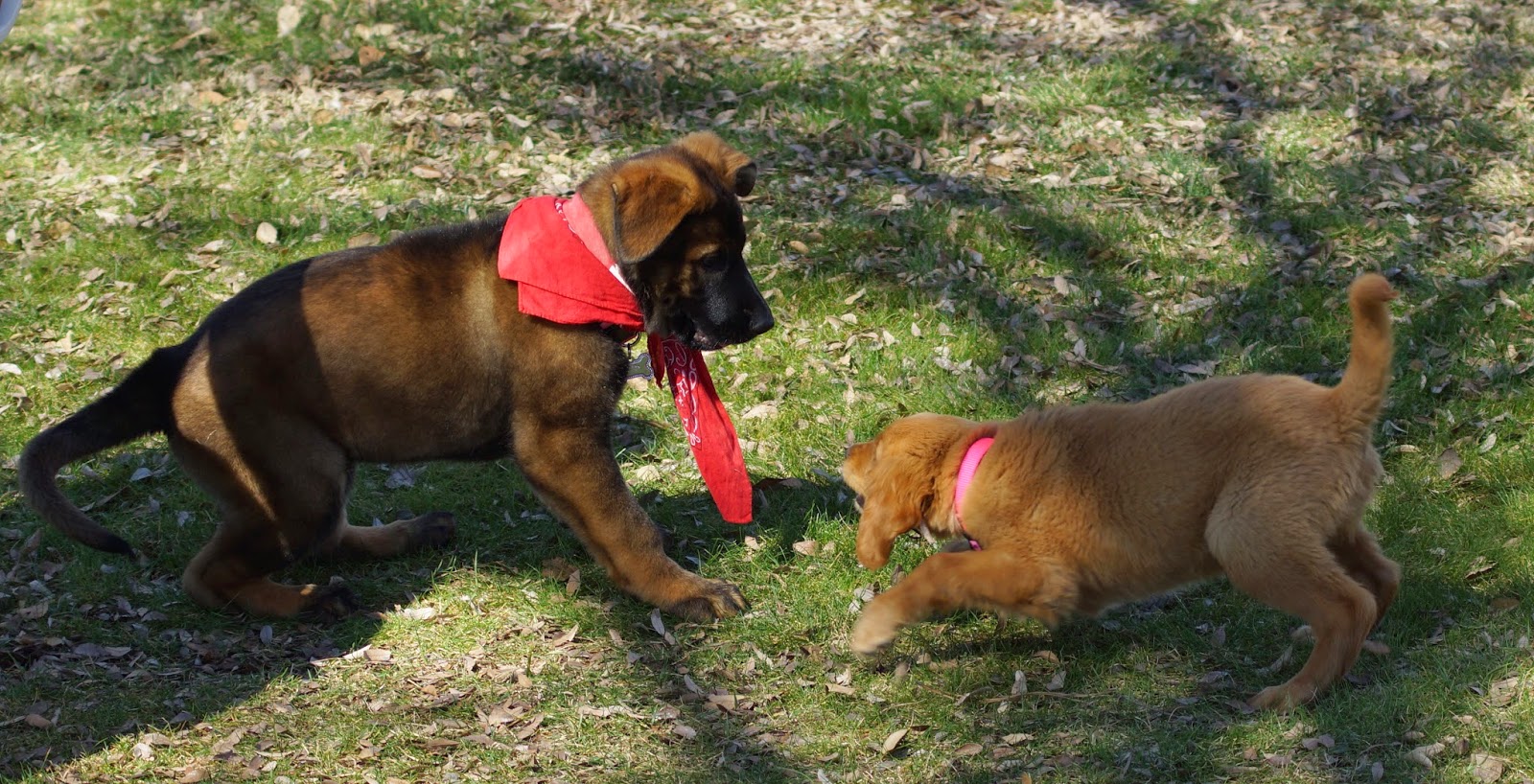 ...and on and on it went, until all that was left was a happy puppy pudding. 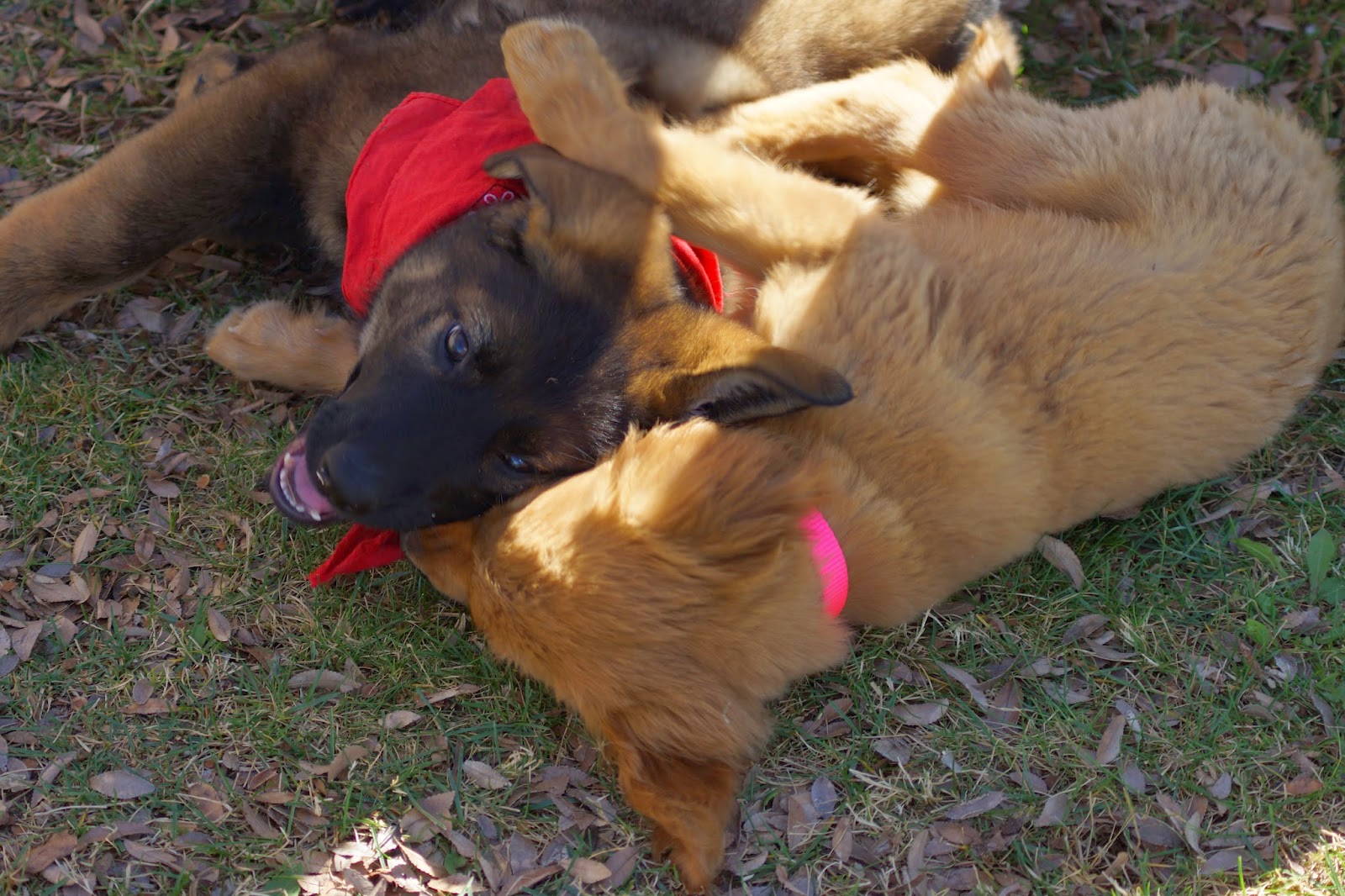 Oh. The human's had a great day too.

Another post for puppy lovers. Honey has made herself right at home in our RV, and considers us her family now. She has various extended family members, as friends and neighbors vie for roles as aunts, uncles, godparents and occasional dog sitters.

Here Rick tries to turn her on to some of life's greater pleasures. You can see what she's really interested in. 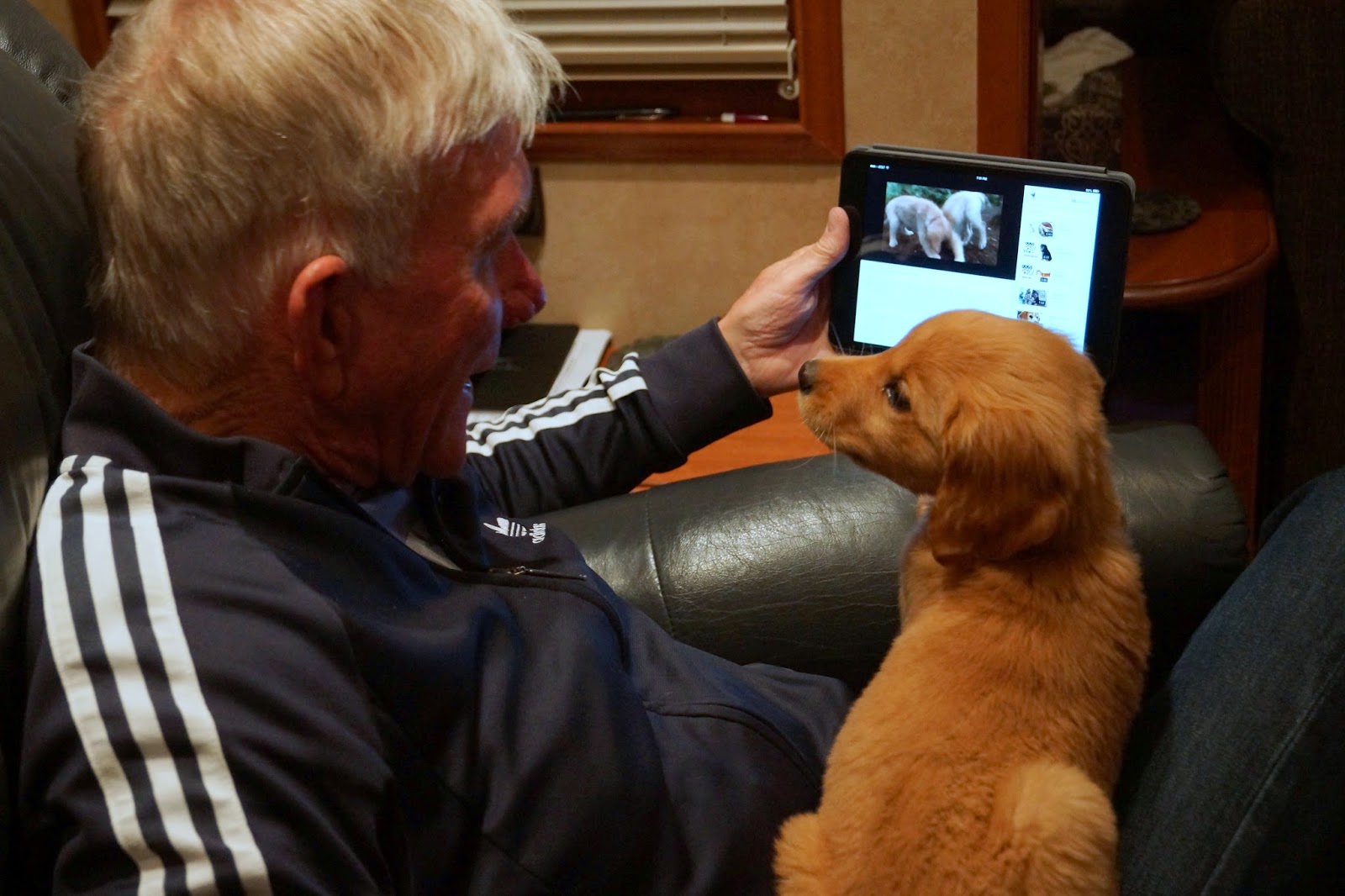 Rancho California, where we are for a couple of months, has a dog park that we have yet to visit -- too many big dogs for a little girl just yet. We may visit before we leave. Although it's a huge RV park, sometimes the residents here get a little nervous about their "private property" (ownership RV sites) and the golf course, leaving us basically a strip of grass along the edge of our site, and the street for walks.  There are a few open spaces that are not near RV sites or the golf course and we haven't been reprimanded for walking there yet.  We try to hit those daily for training. She's great at sit, stay, and "Here Honey!" She's beginning to learn lie down and the "touch" command. She really likes that one.


As noted in a previous post, she really loves to climb and tunnel. (I think maybe she got a few Jack Russell genes along the way somewhere.) We're thinking she's going to be well suited for agility training pretty soon.


Thanks for your patience while we indulge in puppy love. I promise when we get back on the road there'll be a little more variety. Then we'll see how Honey likes to travel.