Wow, we've been seeing a lot around here. Washington state is a beautiful place, with our favorite kind of landscapes: coasts, mountains and forests. I hear it even has some desert on the east side, but we haven't seen that. We're on the Olympic Peninsula now, but I'm going to backtrack just a little to catch up.

While still down in Woodland, WA, close to Portland, we were very close to the Ridgefield Nature Preserve, and visited that a couple of times. It's a wetlands along the Columbia River. We saw a nest of bald eagle fledglings, but couldn't get a good picture of them. They wouldn't turn around, darn it. We also saw a single coyote out hunting, and heard her little pack celebrate when she got home with wild whoops and cries. Love that.  Spotted a beaver and a few nutria (!) too. There were lots of ducks: a new one for us was the cinnamon teal, a beautiful little duck. But here was the best of the day - a Wilson's Snipe. 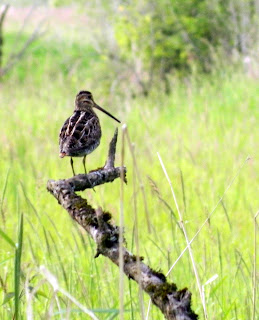 And this tree swallow wasn't too shabby either. 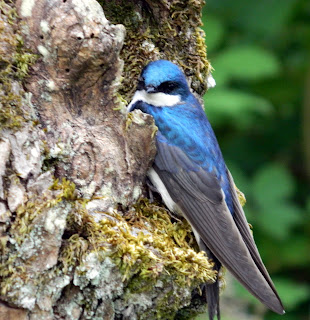 Before we left Woodland we also headed up to Mt. Rainier - an overnight trip. Although it was far, we didn't think we'd be getting any closer once we were on the Peninsula. Well, we never got a view of the mountain because of the clouds, but we did take a few little hikes and crossed the glacial wash of the Nisqually River on this log bridge. 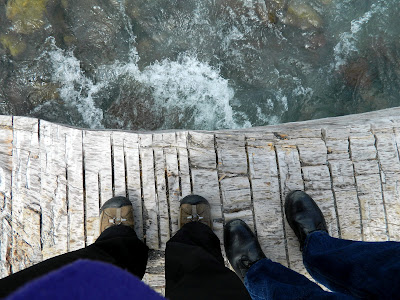 Saw many waterfalls, big and small. 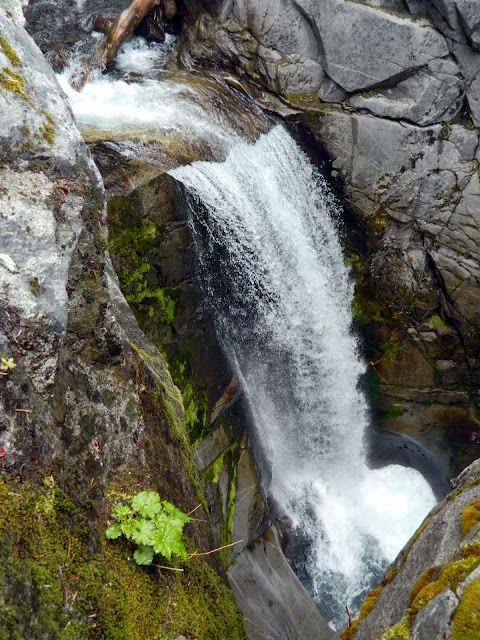 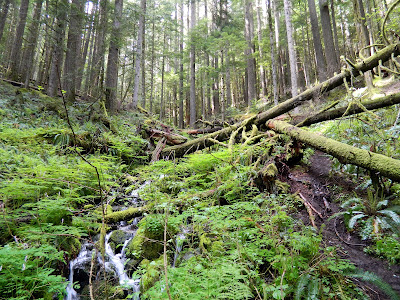 And this tiniest little wildflower, no bigger than a dime. 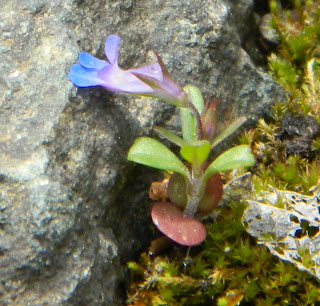 On the first of June we moved north to Sequim, WA. Sequim is on the Olympic Peninsula, and although the area is known for it's high rainfall, Sequim boasts 300 days/year of sunshine. It's weather is temperate year round, and it is about equidistant from the mountains and the Straight of Juan de Fuca. Lots of lavender farms because of the mild winters. We have been getting lots of cool, cloudy weather though, even if the sun does peak out for at least a few minutes every day.

Once here, we started exploring the area. West of Sequim is Port Angeles, kind of a funky logging town, that has grown up to be a busy ferry and lodging town for those visiting Olympic National Park. It has an active port that deals mostly with lumber and paper, and a five mile spit that protects the port.  The spit is a nice place to view the harbor, the Straight, Vancouver Island and the sunset. 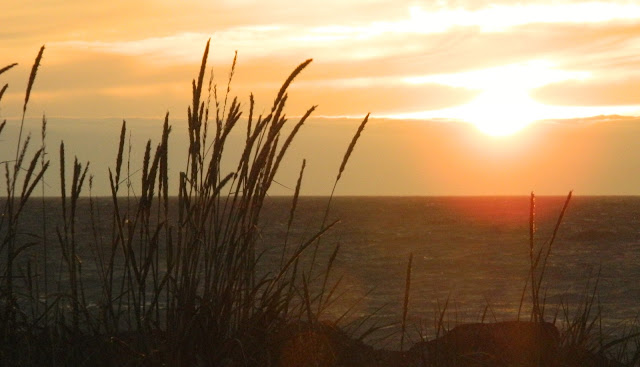 Right in Sequim are the Dungeness National Wildlife Preserve and Recreation Areas with great views, trails and beaches. We've walked around there a couple of times. This picture of the gull is looking down over a cliff at the surf below. 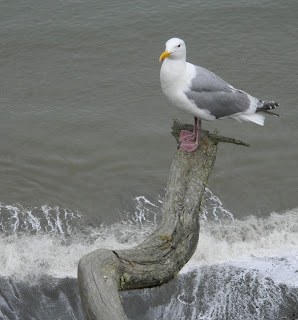 View of the Dungeness Spit from further down the same cliff. 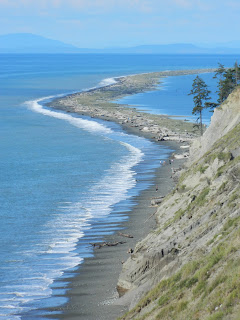 East of Sequim is Port Townsend, another busy port, but with a different character. It is a Victorian town, with a large marina that harbors and repairs mostly fishing boats, and some person sailing boats and ocean going yachts.  It draws many visitors and has a high quality downtown area.  The flavor of the town is kind of steampunkish, and in fact they're having a steampunk festival there this month.  Adjacent Fort Worden has a beautiful old naval campus, with wooden buildings and a lighthouse. 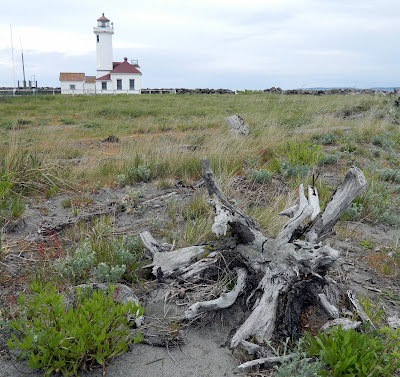 ...a beach rose amongst the drift wood.

Then we drove out to Cape Flattery, which was my favorite experience here so far. The drive is kind of long, passing through tiny towns along the coast, and finally through the Makah Reservation at the most northwestern tip of the continental US.  There is a wonderful trail out to the Cape, through deep woods along a rustic board walk, 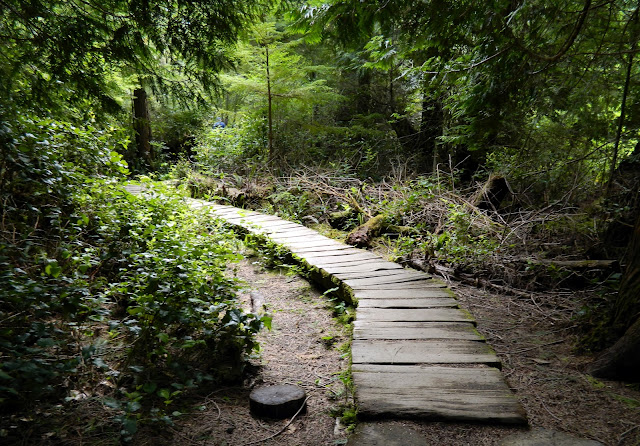 with big spooky trees and sweet undergrowth of ferns and wildflowers all the way. 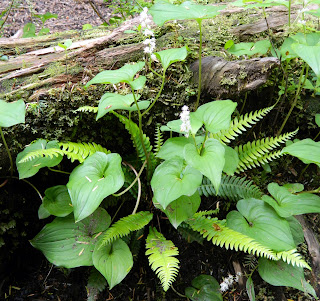 At the end of the path you emerge suddenly out of the woods onto the cliffs above the ocean and these incredible views of deep clear blue water, sea stacks and crashing waves. 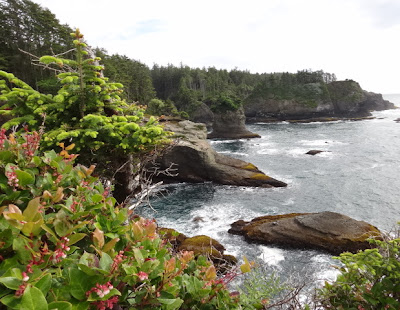 When the sun came out, the colors were glorious. 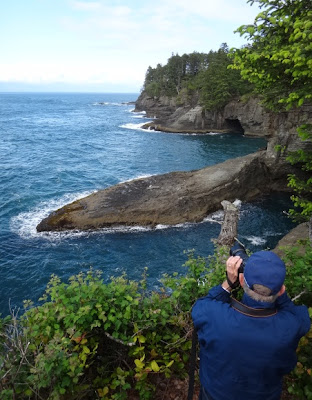 Rick had his camouflage outfit on, so you might miss him in this picture.
The next day we went to the Hoh Rainforest, and I'll post about that soon.